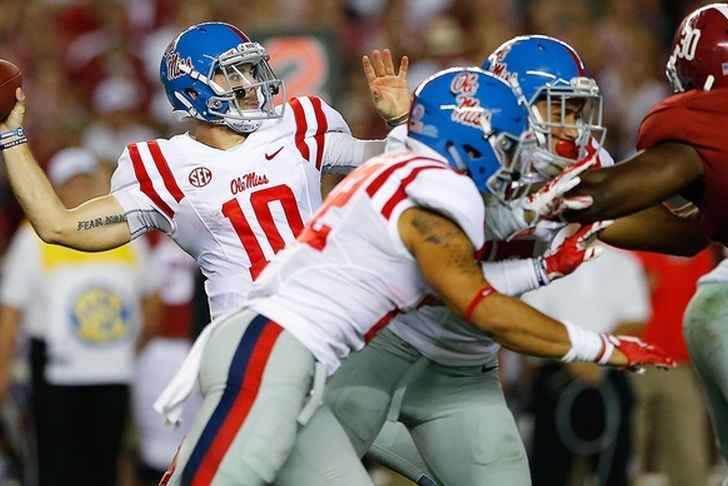 Each year, there are several college football teams that play schedules that feature multiple challenging games, both in-conference and out-of-conference. So which major college football programs have the toughest schedules this year? This list is based on ESPN's Football Power Index, which features a strength of schedule rating.

The results are a bit surprising, with the SEC and Pac-12 dominating the list. While only the Top 5 are listed, the Top 20 has eight SEC and eight Pac-12 teams. The Big Ten suffers badly in the FPI, with the highest team ranked 31st. These five teams that ranked the highest play a challenging conference and non-conference slate. With that in mind, here are the 5 Toughest Schedules Among Power 5 Conference Teams In 2016:

5. Alabama Crimson Tide
Alabama plays Western Kentucky (who was good last year), Kent State (who was bad last year) and D-II Chattanooga in the non-conference. However, they rank this high because they play USC to open the season and play in the SEC. Road games against Tennessee, Ole Miss, LSU and Arkansas won't be easy games for the Crimson Tide.

4. Cal Golden Bears
Cal faces a 3-win Hawaii team to start the season, but also plays 11-win San Diego State and Texas next year. But Cal mostly ranks so high because of their conference slate. They play six games against teams that won at least eight games, and only one Pac-12 team that didn't make a bowl game.

3. Florida State Seminoles
FSU plays South Florida and Charleston Southern in the non-conference, but also open the season against Ole Miss and end it against Florida. The Seminoles also host Clemson, but it's the two tough non-conference games that likely help FSU rank so high.

2. Ole Miss Rebels
Ole Miss has a similar slate as Alabama, but replaced USC with FSU. The Rebels face Wofford, Memphis and Georgia Southern in non-conference games that shouldn't be much of a challenge. But, the game against FSU combined with their SEC West games help Ole Miss rank highly.

1. USC Trojans
Not only does USC play a tough Pac-12 schedule, they also open the season against Alabama and end it against Notre Dame. Those two games alone would help USC rank in the top, but toss in games against Oregon, Stanford, Utah, Oregon and UCLA, and you can see why USC is at the top of the list.