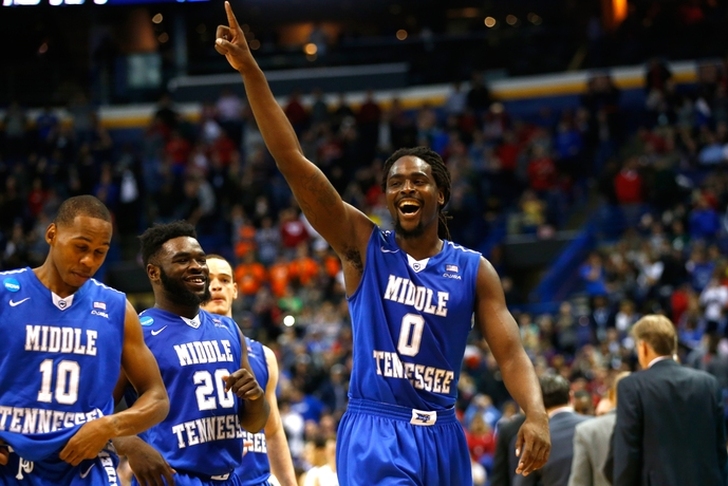 The first round of the NCAA Tournament has been one of the best in recent memory, full of close games, incomprehensible upsets (looking at you, Middle Tennessee), and an insane amount of buzzer-beaters (thank you, Northern Iowa). Can we expect that continue into the second round on Sunday? Here are three things to watch for:

Can Cinderella keep dancing?
The three lowest seeds remaining in the tournament - (13) Hawaii, (14) Stephen F. Austin, and (15) Middle Tennessee - all play on Sunday with a chance to extend their dream seasons.

Hawaii knocked off an undermanned Cal team in the first round, and they'll now be going up against a Maryland team that nearly blew a 20-point lead against South Dakota State. Stephen F. Austin will face Notre Dame after vastly outplaying West Virginia, and Middle Tennessee is set to do battle against Syracuse after pulling off the upset of the tourament against Michigan State - giving them a chance to become just the second 15-seed to reach the Sweet 16 in tournament history.

Let's not forget about the other double-digit seeds
Those three schools have stolen most of the headlines to this point, but (10) VCU and (11) Northern Iowa (fresh off their half-court buzzer-beating win over Texas) also have a chance to become double-digit seeds in the Sweet 16. VCU will get their shot at Oklahoma and star guard Buddy Hield, while UNI gets a crack at Texas A&M.

If both win, they'll play each other in the Sweet 16 on Thursday.

Will Villanova reach the Sweet 16?
The Wildcats have been bounced from the tournament in the second round each of the last two years despite being a top-two seed each time. In fact, Villanova hasn't made it to the second weekend of the Big Dance since their Final Four run in 2009.

Their core group of seniors have won three Big East regular season titles and two Big East tournament titles - they just haven't had success in the NCAA Tournament. A matchup against Iowa on Sunday will determine if they finally get to the Sweet 16 or not.