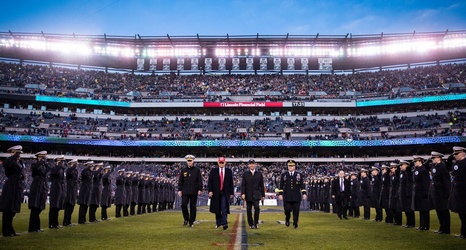 While military service academies have long competed in college sports, they have mostly emphasized training future officers rather than serving as a steppingstone for athletes seeking a career in professional leagues.

Under a new Department of Defense policy promoted by President Trump on Saturday at the Army-Navy football game in Philadelphia, the few athletes who are good enough to catch the attention of the pros may not need to choose one path instead of the other.

The new rules, announced earlier this year and approved in a memo signed last month by Defense Secretary Mark Esper, allow athletes with a realistic shot at playing professionally to seek a delay in their military service obligations, a requirement that often lasts for about five years after graduation.