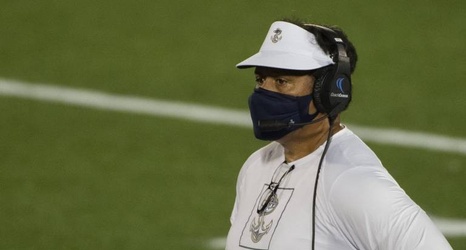 When you coach at a service academy, you can't necessarily vent your frustration toward the powers that be within a traditional university structure.

Navy head coach Ken Niumatalolo criticized the decision to carry on with the Commander-in-Chief's Trophy series despite the fact Air Force has only two games scheduled this season. Niumatalolo directed his ire toward "guys at the Pentagon," per ESPN:

"Where else in the country would you play for something of value and everybody's schedules are not the same? This is the No. 1 thing we fight for every year -- the Commander-in-Chief's Trophy.