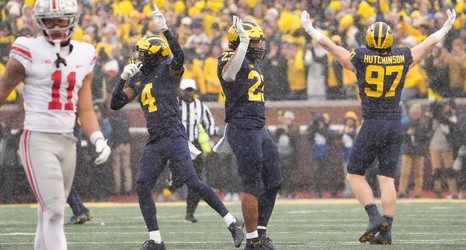 Michigan's win against Ohio State moves the Wolverines ahead of Alabama in the USA TODAY Sports NCAA Re-Rank 1-130.

The program's first win in the rivalry since 2011 has the Wolverines set to take on Iowa in Saturday's Big Ten championship game. Ohio State's second loss on the year drops the Buckeyes five spots to No. 8.

Alabama was on the ropes late in the fourth quarter against Auburn before being helped by the Tigers' poor clock management. The Crimson Tide scored the game-tying touchdown with under a minute left and won the first overtime game in Iron Bowl history.