Joe Burrow Makes Heisman Statement as No. 2 LSU Holds off No. 3 Alabama 46-41 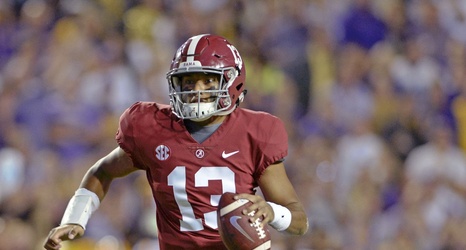 Joe Burrow and No. 2 LSU went into Tuscaloosa on Saturday and defeated Tua Tagovailoa and No. 3 Alabama 46-41 in a pivotal SEC West showdown that featured no shortage of College Football Playoff implications.

Burrow led the way for the Tigers by throwing for 389 yards and three touchdowns. In his first game since undergoing ankle surgery on Oct. 27, Tagovailoa threw for 418 yards and four touchdowns for the Crimson Tide in a losing effort.

It marks LSU's first victory over Alabama since 2011, snapping an eight-game losing streak in the rivalry. The loss snaps the Crimson Tide's 31-game home winning streak.