‘It’s Going to Hurt’: A Football Playoff Without Alabama 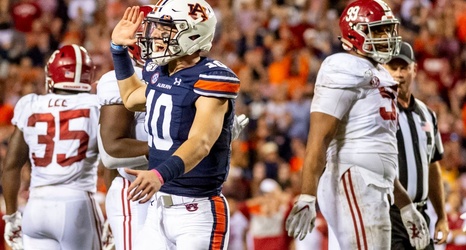 AUBURN, Ala. — As thousands of delirious Auburn fans poured over the hedges, turning a football field into a dance floor on Saturday night, there was a different scene playing out in a far corner of Jordan-Hare Stadium.

One by one, University of Alabama football players, in their familiar white uniforms and crimson helmets, trudged toward the tunnel entrance tucked away in the northeast corner. Christian Harris, a freshman linebacker, looked shellshocked. Trevon Diggs, a senior cornerback, wore a thousand-mile stare. Henry Ruggs III, a junior receiver, draped a towel over his head.

Wading through the Auburn celebration reinforced a grim reality for the Crimson Tide: For the first time in the six seasons that college football has had a four-team playoff to determine its champion, Alabama will not be included — not after a 48-45 loss that was a rollicking, ridiculous, roller-coaster, big-play bonanza of a rivalry game.