How an expanded College Football Playoff would benefit Notre Dame 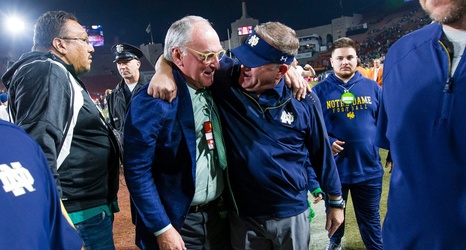 SOUTH BEND, Ind. — For the Notre Dame’s gotta join a conference crowd, Thursday was like Christmas.

Until they realized it really was a lot more like Groundhog Day.

The first meaningful and seismic stride toward expanding the seven-year-old College Football Playoff from four teams to 12 — likely in 2023 — is neither a threat nor an enticement for Notre Dame to reconsider its independent status in football.

Beyond that, the proposal from a four-person committee that included Notre Dame athletics director Jack Swarbrick presents some give and take for the Irish in the new format, but ultimately a perceived net gain.