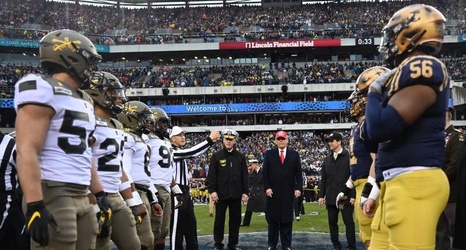 Before taking in Saturday's Army-Navy game, President Donald Trump spoke to players for both teams about a potential policy change that would allow them to delay their active-duty service to pursue a career in professional sports.

Per ESPN, Trump went into the two locker rooms to tell Army and Navy athletes he wanted to give them an opportunity "to make a fortune, and after you're all finished with your professional career, you'll go and you'll serve and everybody's thrilled" if they have potential to play in a pro league.

The report noted Defense Secretary Mark Esper signed a memo in November that would require athletes to receive approval from the Pentagon chief and they would have to eventually fulfill their military obligation or repay their education costs.