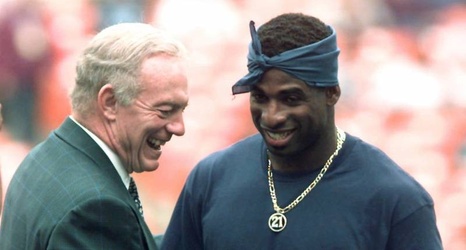 Dallas Cowboys owner Jerry Jones has given Deion Sanders a ringing endorsement to become Florida State's next head football coach amid rumors the school is looking at the Pro Football Hall of Famer.

Appearing on 105.3 The Fan's The K&C Masterpiece, Jones explained why Sanders has what it takes to become a successful head coach:

"I've actually watched him coach. I've watched him work with younger players in the pros and he's outstanding. He has all the credibility that you could ever imagine, both from knowing what he's talking about, plus the sensitivity or the perception that he has with people skills.