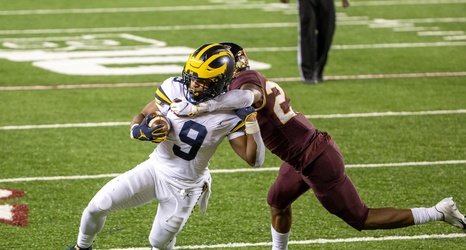 The start of the Big Ten was expected to influence the outlook on the College Football Playoff. Opening weekend delivered change.

Penn State's hopes took a major hit after a disappointing loss at Indiana. Michigan, instead, looked like the biggest contender to Ohio State in the East division with its impressive performance against Minnesota. Wisconsin showed an improved offense with quarterback Graham Mertz providing life to its usually conservative passing game.

The impact on this week's bowl projections sees the Nittany Lions fall out of its position in the New Year's Six. The Wolverines move into that spot and are poised to rise higher with quarterback Joe Milton giving the offense a new dimension.