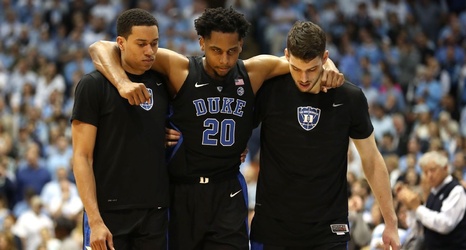 Duke's rivalry with North Carolina took another turn for the worse Saturday night.

Marques Bolden, the No. 4 Blue Devils' primary big man, suffered a left knee injury just minutes into the team's 79-70 loss to the No. 3 Tar Heels in Chapel Hill, North Carolina.

Bolden, a starter, came down awkwardly while blocking a shot on a Tar Heels fast break at the 17-minute, 27-second mark of the opening half. He stayed down for several minutes before needing assistance to leave the court.

Duke announced just ahead of the second-half tipoff that Bolden would not return.