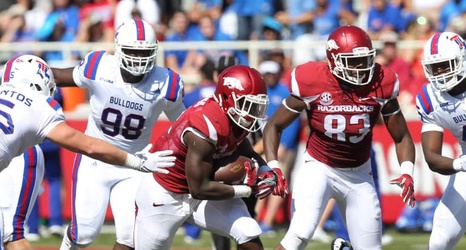 Arkansas football recruit Catrell Wallace has been arrested on suspicion of second-degree sexual assault and tampering, according to Chris Bumbaca of USA Today.

The Benton Police Department in Arkansas alleges the 18-year-old had a sexual encounter with a 12-year-old early on Jan. 1.

"Although it appears to have been a consensual encounter, BNPD detectives were able to determine that Wallace had reason to believe the victim was underage at the time of the crime," police said in a statement. "It was also noted that Wallace instructed witnesses to lie about the crime in an effort to conceal it.