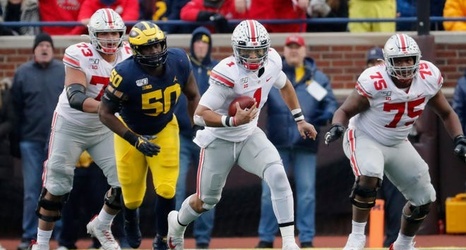 Ohio State had no issues with rival Michigan and solidified its grip on No. 1 while Alabama's loss in the Iron Bowl led the Crimson Tide to plummet out of the top four in the USA TODAY Sports NCAA Re-Rank 1-130.

The Buckeyes' 56-27 win was blown open in the second and third quarters, turning what was a 14-13 game into the second blowout in a row in the series. While No. 2 LSU was predictably impressive against Texas A&M, it would be impossible to unseat OSU from atop the Re-Rank after yet another dominant performance against a ranked opponent.