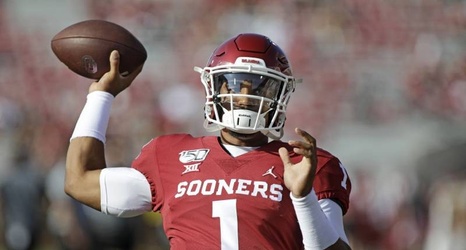 Former teammates Jalen Hurts and Tua Tagovailoa are co-favorites to win the Heisman Trophy at 3-1 after Week 2, per Caesars Palace (h/t B/R Betting).

Hurts, now the Oklahoma quarterback after transferring from Alabama, has thrown six touchdowns and completed 82.9 percent of his passes through two games. He's also rushed for 223 yards and three scores. He's led No. 5 Oklahoma to 119 total points in wins over South Dakota and Houston.

Tagovailoa, the Crimson Tide's signal-caller, has completed 76.4 percent of his passes for seven touchdowns while rushing for 48 yards and a score.