Predicting The Winner Of Every Major College Football Bowl Game 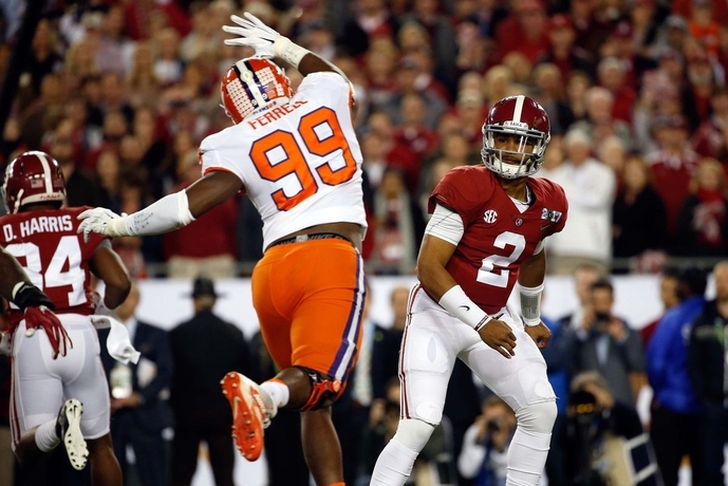 We're already over a week into the college football bowl schedule, but as we know, most of the big games don't come until after Christmas and on New Year's Day. Who can we expect to win those big games, including the two College Football Playoff matchups? Here are our predictions:

Missouri's offense has been playing well, but they haven't faced a defense as good as Texas' in a while. Tom Herman gets a big win.

Virginia Tech hasn't beaten anyone of note this year and Oklahoma State's offseason will dominate.

Bryce Love is going to have his way while Kenny Hill and TCU will struggle against Stanford's defense.

Lamar Jackson is not going to lose his final game in a Louisville uniform - especially not with Mississippi State playing a backup quarterback.

The Nittany Lions are more proven and have better talent on both sides of the ball. Expect them to win by two touchdowns.

Miami has better athletes and is playing this game at home.

Michigan's lack of a passing game will be exposed once again in this low-scoring affair.

A coaching change at UCF will show itself against a team with a significant talent advantage in Auburn.

Notre Dame hasn't beaten anyone good outside of South Bend this season. That's not going to start now.

College Football Playoff at the Rose Bowl Game Presented by Northwestern Mutual
No. 3 Georgia vs. No. 2 Oklahoma
Prediction: Oklahoma

Baker bleepin' Mayfield is on a mission. Georgia simply won't be able to keep up with Oklahoma's offensive onslaught.

College Football Playoff at the Allstate Sugar Bowl
No. 4 Alabama vs. No. 1 Clemson
Prediction: Alabama

I think Clemson is the better team - I just can't imagine anyone beating Alabama and Nick Saban two years in a row.