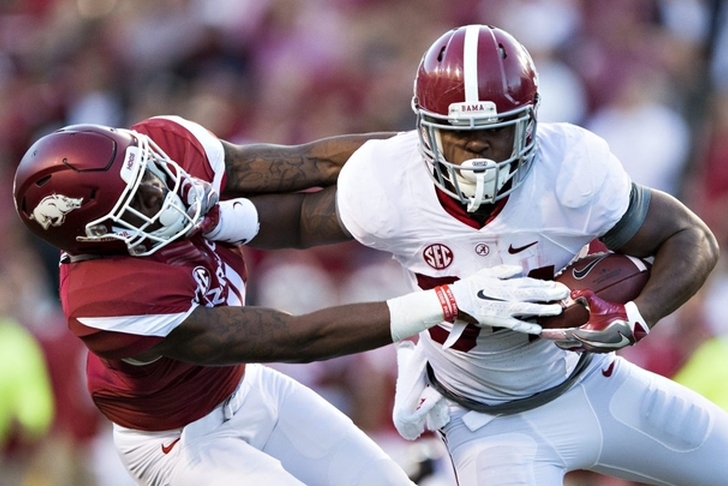 The AP Poll usually releases on Sundays, but that's not the case this week. With Georgia and South Carolina's game delayed until Sunday afternoon because of Hurricane Matthew, the AP has elected to delay the release of the poll until Monday. Since the poll is delayed, we've decided to take our best shot at projecting the Top 10 college football teams teams.

We've also tried to forecast the number of first place votes each team will get. Check out our projected top 10 teams below.

Alabama didn't have much trouble against a ranked Arkansas team. The Tide should only get more first place votes this week.

The Buckeyes didn't look all that great at times against Indiana. QB J.T. Barrett didn't even throw for 100 yards. But, OSU still beat Indiana 38-17 and shouldn't drop in the polls.

Clemson had no problems with Boston College. They likely won't rise, but won't drop either.

Michigan just crushed Rutgers 78-0 in a game the Wolverines could have scored 100 if they really wanted. Michigan likely won't pass OSU or Clemson, but they deserve at least the No. 4 spot.

Washington took it to Oregon on the road, beating the Ducks 70-21. The Huskies won't jump anyone, but they are clearly one of the top 5 teams in the nation.

This is where things get a bit trickier. The Aggies survived a classic Tennessee comeback effort, winning in double OT. A win over a Top 10 team should be enough to push the Aggies to No. 6, especially with Houston's loss.

The Cardinals were on bye this week, but they could slide a little bit. The Aggies should jump them, but with No. 9, 10, 11 either losing or on bye as well, the Cardinals should stay at No. 7.

Thanks to Miami, Tennessee and Houston losing, it looks like the Badgers will crawl back into the Top 10. They were on bye this week, but have a critical matchup next week when they host Ohio State.

Another team on bye that should rise into the top 10 is Nebraska. They haven't really played anyone of note (since Oregon is apparently terrible this year). But 5-0 is 5-0 and it should be enough to get the Huskers into the Top 10 for the first time in quite some time.

Baylor hasn't played anyone this season, but they are 5-0. If it wasn't for the offseason turmoil, Baylor would likely already be in the Top 10. Tennessee, Houston and Miami (FL) all lost and those losses should be enough to push Baylor into the Top 10. Still, one of those teams could potentially keep the 10th spot.