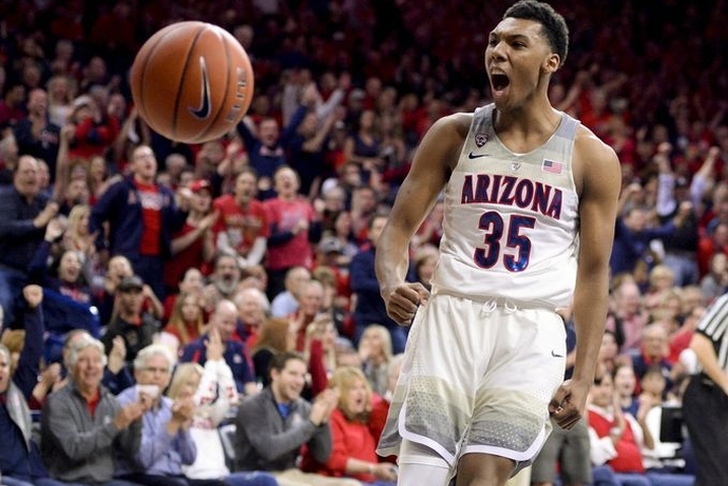 The 2017 NBA Draft deadline for early entrants to withdraw from the draft came and went on Wednesday, meaning that the prospect pool is set and college basketball teams know which players will be back for the 2017-18 season. Now, we have a better idea as to which teams will enter the new year at the top of the polls. There is still time for these rankings to change due to transfers and possible late recruiting pickups, but without further ado, here are Chat Sports' still early college basketball top 25 rankings, post-draft deadline edition:

25) Virginia Cavaliers
I'm well aware that you probably won't be seeing Virginia ranked anywhere else, and that's fine. I get it. London Perrantes is graduating while Marial Shayok and Darius Thompson are both transferring, all of whom played big roles for the Cavaliers last year.

However, UVA does return six other players who saw significant playing time and head coach Tony Bennett will have Virginia among the best teams in the country again next year (and I'm done doubting him). Freshmen Kyle Guy and Ty Jerome are ready to assume bigger roles with the team and should flourish as sophomores.

24) Butler Bulldogs
Butler will be solid one again next season with three of their top six scorers returning, including Kelan Martin (16.0 ppg). Three four-star prospects will join the mix as well.

23) Texas Longhorns
This is roughly where Texas started the season last year - and it didn't go well for them. However, there is plenty of reason for the Longhorns to be optimistic in the third year of the Shaka Smart era. They do lose projected lottery pick Jarrett Allen, their best player from last season, but Andrew Jones is back after withdrawing from the draft and they landed the country's No. 3 overall recruit in Mo Bamba. This will the most talented team Smart has ever had at Texas or at VCU - what can he do with it?

22) Northwestern Wildcats
The Wildcats were a great story this past season, making the tournament for the first time in program history. Next year, expectations will be higher as they return all of their top five scorers. How will they handle that?

21) UCLA Bruins
This spot is far from secure for UCLA - we really have no idea what to expect from them. Lonzo Ball, T.J. Leaf, Bryce Alford, Ike Anigbogu and Isaac Hamilton are all gone, and the Bruins are relying on the No. 4 recruiting class to replace them. Their performance next year will tell us how much of this year's success was Lonzo Ball and how much was actually Steve Alford.

20) Purdue Boilermakers
Purdue was prepared for Caleb Swanigan departing for the NBA, and Isaac Haas will step right in at the starting center spot. With reserve guard Spike Albrecht being the only other player who is leaving this offseason, the Boilermakers should be a force in the Big Ten again.

19) Alabama Crimson Tide
You're going to be hearing a lot about a breakout season from Alabama over the next several months, so go ahead and get used to it. Five-star guards Collin Sexton and John Petty - headliners of the No. 6 recruiting class in the country - are the biggest reason why, and Sexton has all the makings of a star. Considering the Tide also return six of their top seven scorers, and you have a team that will be very, very dangerous.

18) Maryland Terrapins
Melo Trimble's decision to go to the NBA was curious, but Maryland returns everyone else from their rotation - including last year's three star freshmen (Justin Jackson, Anthony Cowan and Kevin Huerter) that will be the core of this season's team. They will be one of the top squads in the Big Ten again.

17) Xavier Musketeers
With Trevon Bluiett back, Xavier is going to be very good again next year. Quentin Goodin seems primed for a breakout year after filling in for Edmond Sumner and playing very well in the tournament. Four four-star prospects will add needed depth, too.

16) Seton Hall Pirates
Angel Delgado's return (15.2 ppg, 13.1 rpg last season) put Seton Hall back in the national conversation. They now have all four leading scorers back from last year's team and an impact freshman in Myles Cale. Seton Hall may very well be Villanova's biggest challenger in the Big East.

15) Minnesota Golden Gophers
Richard Pitino's squad had a breakout year, winning 24 games and making the NCAA tournament after winning just eight games in the 2015-16 season. With only one senior leaving the team, Minnesota will be right in the thick of a competitive Big Ten race.

14) Miami Hurricanes
The Canes should return six players from their eight-man rotation, and while losing Davon Reed hurts, Bruce Brown appears ready to have a bigger role in the offense. Incoming five-star shooting guard Lonnie Walker will give them another high-quality player.

13) Cincinnati Bearcats
Troy Caupain is gone for Cincinnati, and it'll be hard for the Bearcats to replace their leader. However, they do get four of their other top five scorers back, and Sacred Heart transfer Cane Broome (23.1 ppg and Northeast Conference Player of the Year in 2015-16) should give them a desperately needed offensive weapon. This group will be very, very good again - although they aren't the favorites in the AAC.

12) North Carolina Tar Heels
The champs will be very good again next year, but they will have a very different look. Kennedy Meeks, Isaiah Hicks and (somewhat surprisingly) Tony Bradley are all gone, leaving Luke Maye as their only proven big man. They return five of their top nine scorers, but without the dominant size of years past, look for them to play a more guard-oriented game.

11) Duke Blue Devils
Duke got lucky Marques Bolden decided not to transfer, or else the Blue Devils would have been in deep trouble. Bolden and incoming freshman Wendell Carter (No. 4 overall prospect) will be Duke's only big men (and they're counting on Bolden to vastly improve). Five-star commit Trevon Duval gives them a true point guard and Grayson Allen is still a star, but this will be a short rotation full of holes - particularly on the wing.

10) USC Trojans
USC doesn't lose any key players from last year's team that made a small tournament run, and they only got stronger thanks to the arrivals of Duke transfer Derryck Thornton and four-star shooting guard Charles O'Bannon Jr. They'll be the biggest threat to Arizona in the Pac-12.

8) Florida Gators
Florida remains a program on the rise under head coach Mike White, and KeVaughn Allen will go into next season as perhaps the preseason favorite to win SEC Player of the Year. With a top 10 recruiting class joining a group returning five of their top eight scorers, the Gators will be looking to improve on last year's Elite 8 finish.

7) Villanova Wildcats
It's not going to be easy to replace Josh Hart (who may be the best player in Villanova history) and Kris Jenkins. However, guard Phil Booth is back after missing all of last season due to injury and big man Omari Spellman will make his debut after being academically ineligible. Good years from those two, along with projected breakout years from Jalen Brunson and Donte DiVincenzo, may lead Villanova to a fifth straight Big East title.

6) Louisville Cardinals
The Cardinals would have been one of the top two or three teams in the country if Donovan Mitchell returned, but he stayed in the draft and will probably be a top 15 pick. Still, Louisville has so much talent returning, headlined by Quinten Snider, Deng Adel, Anas Mahmoud and V.J. King, who is a prime candidate to be the breakout player of the year.

5) Wichita State Shockers
I have Wichita at five, but I really wanted to put them higher (if that tells you how much I love this team). They went 31-5 this past year and literally have everyone back from their 10-man rotation. All 10 guys. They are going to be at the top of polls all season long and are the favorite to win the AAC in their first year in the conference.

4) Kentucky Wildcats
Yes, the Wildcats are replacing Malik Monk, De'Aaron Fox and Bam Adebayo, but no one does that better than Kentucky. The nation's top recruiting class consists of six five-star prospects (including Hamidou Diallo, who enrolled in January and decided to return to UK after testing draft waters), all of whom rank in the top 24 nationally and will form a majority of UK's starting lineup.

Wenyen Gabriel is their only significant returner, but Kentucky will still be extremely talented, athletic and very good defensively. Experience and perimeter shooting are obvious questions surrounding this team they'll have to address.

3) Kansas Jayhawks
Usually, when you lose the National Player of the Year (Frank Mason), a top five pick (Josh Jackson) and your only big man that saw minutes this past season (Landen Lucas), there is cause for concern. However, the Jayhawks are primed to be one of the best teams in the country again. Devonte' Graham, Svi Mykhailuk, Lagerald Vick and Udoka Azubuike all return, and will be joined by five-star forward Billy Preston and former five-star recruit and Mississippi State transfer Malik Newman. Kansas will be deep and talented again.

2) Michigan State Spartans
This past season was disappointing for Michigan State because of their struggles with all of their talented freshmen. The good news? They will ALL be back, including Miles Bridges (preseason favorite for National Player of the Year) - and they won't be freshmen anymore. UNLV transfer Ben Carter will finally be able to contribute, and their frontcourt will be improved thanked to a healthy Gavin Schilling, five-star freshman Jaren Jackson and four-star Xavier Tillman.

1) Arizona Wildcats
When Rawle Alkins withdrew from the NBA Draft and five-star commit Emmanuel Akot reclassified to the 2017 class, the Wildcats shot up to No. 1. Lauri Markkanen, Kadeem Allen and Kobe Simmons are gone, but everyone else is returning from last year's 32-win team, including star guard and Pac-12 Player of the Year favorite Allonzo Trier. They also add the nation's top recruit in DeAndre Ayton in a top-three recruiting class (the fact that he's the final aspect mentioned about this team tell you how good they're going to be).

Follow our NCAA news page for all the latest NCAA Basketball news!