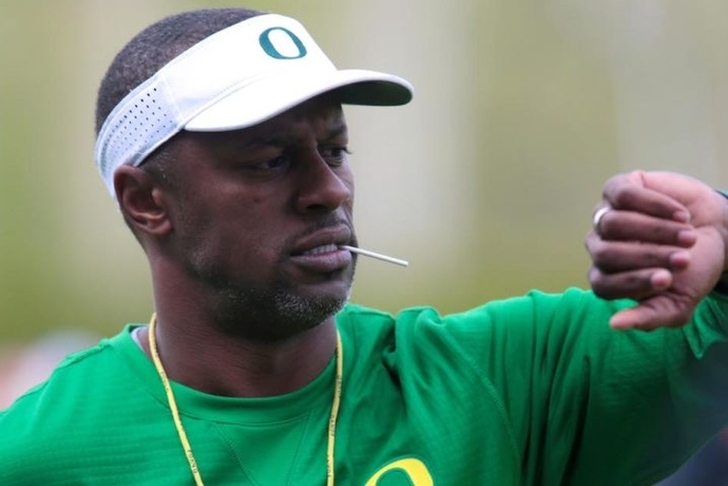 New Florida State head coach Willie Taggart took the Seminoles job after just one season at Oregon, and both Ducks players and some media members are none to happy about the decision.

Taggart had been recruiting for Oregon earlier this week and pledged he'd be with the program long-term after his name was originally linked to the FSU job.

Looking forward to a great day tomorrow with our team. Practice, find out where & who we play in the bowl game, 2017 Team banquet and then back on the road recruiting. Go Ducks! #TheMovement18

Taggart: "There’s no decision to be made. What are we talking about? I’m clear in talking to our recruits and our players; can’t make it no bigger than what it is." #GoDucks

After all, he quickly turned down Florida once they fired Jim McElwain and it looked like he was staying. Now that he has left for that very same job, it rubbed a number of players the wrong way.

He lied straight to my dads face in my living room Thursday night. He didn't keep his word to me Monday. Lost all my respect. https://t.co/JIcv7j6YG7

I didn’t know it would’ve been handled so ugly. Respect the decision 100% but leaving us clueless was messed up.

And we let dude take the “Win The Day” down. Damn

Im Beyond Mad rn there’s no adjective to Describe it

And we let dude take the “Win The Day” down. Damn

However, it's not just Oregon players that have been chiming in on Taggart's seeming change of heart. A number of media members have criticized him as well.

Taggart will be the 1st to serve as HC at three different FBS programs in three years since Todd Graham (Tulsa/Pitt/ASU from 2010-12). So, um, congrats for that.

Willie Taggart on his 3rd school in as many seasons. But heaven forbid a student athlete considers transferring. The hypocrisy astounds me.

Safe to say that Taggart won't be welcomed in Oregon anytime soon.

Taggart, who led the Ducks to a 7-5 record this season, signed a six-year, $30 million deal with Florida State.

Check out our Oregon Ducks team page for all the latest Oregon football news!