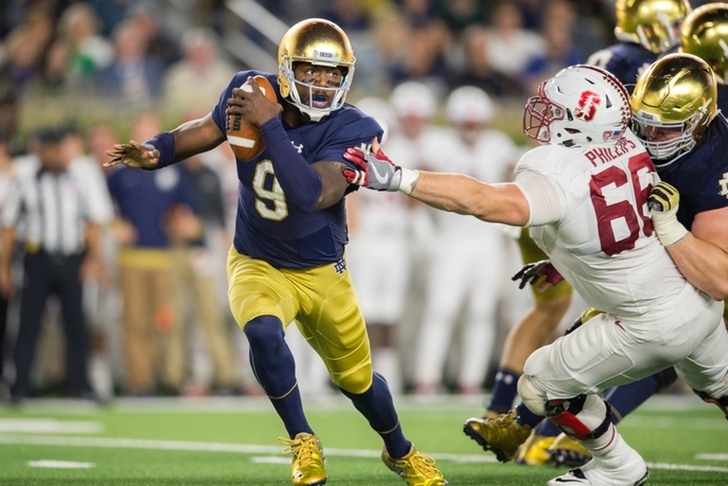 The top graduate transfer quarterback left available is Malik Zaire, formerly of the Notre Dame Fighting Irish. According to a report from Bruce Feldman of Fox Sports, Zaire would prefer to take his talent to the Florida Gators than the Texas Longhorns.

That rule change is that the SEC bans schools from accepting graduate transfers if those players fail to meet academic requirements (i.e. enrolling in classes and then skipping those classes because they're only at the school for the football season). The Gators added two such players in 2013, which resulted in a three-year ban.

That rule could be changed at the SEC meetings this week. If it is, expect Zaire to end up at Florida, where he'll compete for the starting job. The current QB situation features a QB battle between redshirt freshman Feleipe Franks and junior Luke Del Rio. Franks might be a year away from being truly ready, so adding Zaire would allow Franks more time to develop before facing SEC defenses.

If Florida doesn't land Zaire, Feldman reports Texas is the likely backup choice. The Longhorns badly need QB depth, with sophomore Shane Buechele and true freshman Sam Ehlinger the only two scholarship QBs. Zaire would need to beat out Buechele for the starting gig, which wouldn't be easy.

In a handful of starts at Notre Dame, Zaire completed 59.2 percent of his passes for 816 yards, 6 TDs and no picks. A dual-threat, he has 324 rushing yards and 2 TDs. Zaire opened the 2015 season as the starting QB for Notre Dame, but broke his ankle in the second game. DeShone Kizer then took over and remained the starter for the majority of Zaire's time at Notre Dame.

Download the Chat Sports App for updates on Zaire's status as they become available.