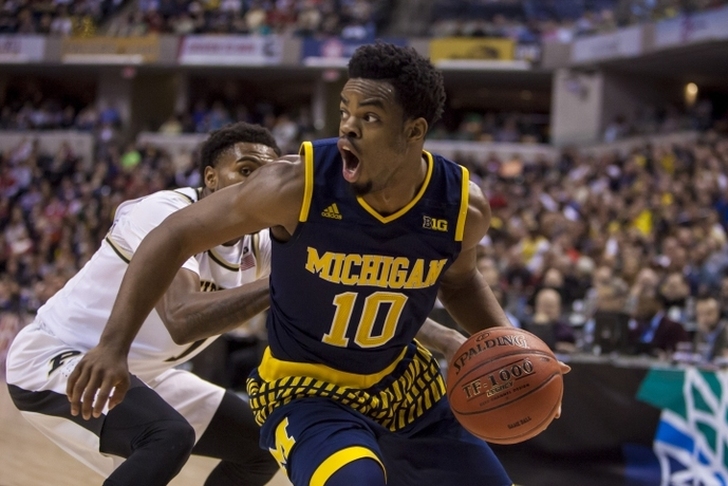 Several teams across the country are holding their breath head of tonight's NCAA Tournament Selection Show, as their at-large postseason hopes lie the hands of the selection committee. Some should be feeling more confident than others about their chances, but for these next eight teams, their fate could easily fall either way.

South Carolina Gamecocks
The Gamecocks have found themselves on the bubble after losing five of their final eight games, but they should still be in the field of 68. They have an 8-5 record against teams in the RPI 100, along with a 9-6 record in road/neutral site games.

Cincinnati Bearcats
The Bearcats picked up a critical win over SMU in the season finale, and that should be enough to push them into the tournament despite their loss to UConn. They're 4-4 against the RPI Top 50, and five of their 10 losses this season have come by two points. Expect them to be in as well.

Michigan Wolverines
Michigan's stunning last-second win over Indiana doesn't make them a lock to get in the tournament, but it does give them another quality win they so desperately needed. Even though they have 11 losses on the season, 10 of those came to teams ranked in the RPI Top 50 - but they do have three wins over RPI Top 25 teams, which it the biggest plus on their resume.

Monmouth Hawks
The Hawks are 27-7 this season, but a loss to Iona means they won't be getting the automatic bid. The sheer volume of wins is impressive and they are among the better mid-majors this season. They have three losses to teams outside the top 200 in RPI and that will hurt their chances, but will be in the tournament because of their 13 road wins (most in the country).

FIRST FOUR OUT:
**Note: Oregon State and Wichita State were listed in the First 4 Out in our previous edition, but losses by San Diego State and Michigan have expanded the bubble, putting them safely in the field.**

San Diego State Aztecs
The Aztecs were upset by Fresno State in the Mountain West Tournament title game, suddenly putting themselves right in the middle of the bubble conversation. Despite having the best defense in the country, San Diego State is just 3-7 against RPI Top 100 teams, including 1-4 against the top 50. A 9-2 road record does work in their favor, but not enough to overcome their lack of any quality wins.

Syracuse Orange
Syracuse's hot start to the season was drastically cooled once they hit conference play, and they've finished with a 19-13 overall record this season. They do have conference wins over Duke (on the road) and Notre Dame, but also have a terrible loss to St. John's on their resume. The Orange's loss to Pittsburgh will likely result in the Syracuse just missing out, especially with all the conference tournament upsets that have occurred.

St. Mary's Gaels
St. Mary's won the West Coast Conference regular season title, including two wins over Gonzaga, but ultimately fell in the conference tournament title game to the Zags. Now on the bubble, their lackluster non-conference schedule has them on the outside looking in. Their best road win (other than Gonzaga) is against Santa Clara, and their best non-conference win is against Stanford. That simply won't be enough to get them in the tournament.

Vanderbilt Commodores
Vandy went into the SEC Tournament squarely on the bubble, and a loss to Tennessee in the first round will surely have them on the outside looking in after the field is announced. Their RPI of 60 doesn't do them any favors, and neither does their 2-7 record against the RPI Top 50. Plus, with only three road wins this season, their resume is filled with much more negatives than positives.