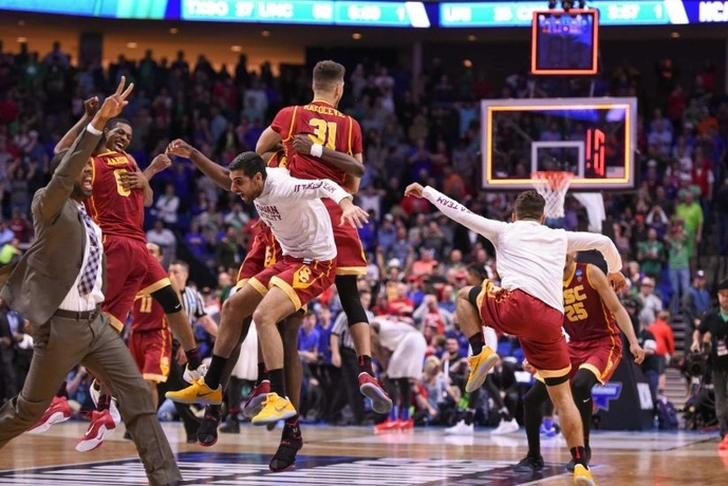 The second full day of the NCAA Tournament here, and we're going to keep you up to date on all the latest upsets and happenings from all over the bracket on Chat Sports. Here are all of the final scores, highlight plays and game summaries that will be updated throughout the day!

(1) Kansas dominates (16) UC Davis for 100-62 win
In typical 1-16 fashion, the Jayhawks cruised past UC Davis for the easy win. The Aggies were able to keep it close for the first 13 minutes when they tied the game 21-21, but then Kansas got hot and blew this game open.

(10) Wichita State holds on for 64-58 win over (7) Dayton
This was a hard fought games by both sides, and neither team held a lead greater than five until the closing minutes of the game. Senior point guard Scoochie Smith did all he could to carry Dayton with 25 points and four assists, but it was ultimately Wichita State's team play (nine different players scored, five had at least eight points) that won them this game.

(2) Duke cruises to 87-65 win over (15) Troy
This game was never really in doubt. Duke started the game on a 20-6 run and never looked back. Grayson Allen had 21 points off the bench to lead the Blue Devils, who also got 18 points from Jayson Tatum.

Jayson Tatum with the double-double! 18 points and 12 boards for the freshman. #MarchMadness pic.twitter.com/MElTzHjLpY

We bet @DukeMBB's Javin DeLaurier (@javelin_22) couldn't do this again if he tried! #MarchMadness pic.twitter.com/6fjlQnQmUN

(6) Cincinnati uses strong defensive effort for 75-61 win over (11) Kansas State
The Bearcats played arguably their most complete game of the season against K-State, leading for virtually the entire game while shooting 62.8 percent from the field - the second highest shooting percentage they've had in any game all season.

(7) Michigan catches fire for 92-91 win over (10) Oklahoma State
Jawun Evans had a stellar performance of Oklahoma State, coming close to a triple-double with 23 points, 12 assists and seven rebounds, but Michigan gained control in the second half of this game by making 11/15 three-pointers. Derrick Walton Jr. led the way for the Wolverines with 26 points and 11 assists.

The rare 4-point play! Muhammad-Ali Abdur-Rahkman (@theprophet_5) hits the 3-pointer and gets fouled (made the FT)! #marchmadness pic.twitter.com/Q1OVdLBJgt

In today's edition of great moments in gambling, Jawun Evans hits the buzzer beater to cover the -2.5 spread for OK St. #marchmadness pic.twitter.com/nQbJJMbA0X

(3) Baylor overcomes slow start for 91-73 win over (14) New Mexico State
For the first 20 minutes of this game, it looked like Baylor was going to lose to a double-digit seed for the third consecutive year, as New Mexico State held a 40-38 lead. However, Baylor woke up in a big way in the second half, reeling off a 24-4 run to put this one away. Al Freeman came off the bench to lead the Bears with 21 points, while Terry Maston also had 19 points off the bench. They were the two leading scorers in the entire game.

Late call boosts (8) Arkansas past (9) Seton Hall for 77-71 win
Arkansas and Seton Hall traded the lead back and forth throughout the entire game, so it's no surprise that the game wasn't decided until the closing seconds. However, that came when Seton Hall's Khadeem Carrington was called for a heavily criticized flagrant foul. Arkansas hit their free throws from that foul call and won the game.

As you could imagine, Seton Hall was none to happy about the call - and they made sure the refs knew about it. #MarchMadness pic.twitter.com/gZ8MnqbujK

(3) Oregon cruised for 93-77 win over (14) Iona
This game was a blowout from start to finish. Iona was able to cut Oregon's 27-point lead down to 13 in the second half, but never got closer than that. Tyler Dorsey led the Ducks with 24 points, while Dillon Brooks added 18 points, four rebounds and four assists.

(2) Louisville overcomes slow start for 78-63 win over (15) Jacksonville State
Jacksonville State put up a fight in this one, and the Gamecocks actually led for the first 13 minutes of the game. Louisville wasn't able to build a double-digit lead until early in the second half, but maintained that as they cruised to the win behind 18 points from Mangok Mathiang. Norbertas Giga scored a game-high 30 points for Jacksonville State.

(11) USC stuns (6) SMU with late comeback, wins 66-65
SMU led for the first 38+ minutes of this game, and star forward Semi Ojeleye (24 points, 10 rebounds) appeared ready to lead them to lead the Mustangs to a victory. The Trojans had other ideas, and Elijah Stewart hit the eventual game-winner just less than a minute to play. It is now the seventh straight year in which a First Four team has advanced to the Round of 32.

Elijah Stewart (@Lou_weezy_ana) hits what was the game-winning three to give @USC_Hoops the upset win over SMU! #MarchMadness pic.twitter.com/Q8gE9Z0WAM

SMU had a chance to win the game with its final shot, but Shake Milton couldn't get it to fall. #marchmadness pic.twitter.com/1O32wWgpdy

(1) North Carolina runs past (16) Texas Southern for 101-61 win
This game was was the monster blowout we all expected it to be, and it is the most lopsided tournament game to this point. UNC point guard Joel Berry II did roll his ankle in the second half, and while the injury didn't look serious, it's something to keep an eye on moving forward.

(11) Rhode Island cruises for 84-72 win over (6) Creighton
Even though they were the lower seed, the Rams never trailed in this one and held a double-digit lead for most of the half. All five Rhode Island starters scored at least 12 points, while they limited Creighton to just 39.1 percent shooting.