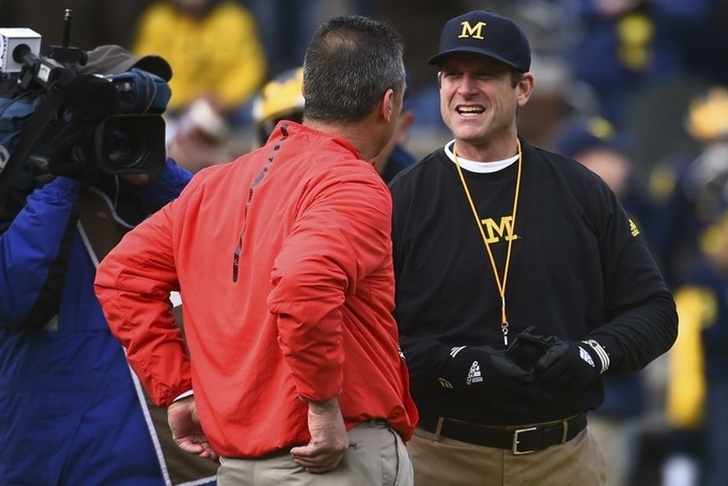 The college football regular season is over and the bowl games have yet to begin, which means many programs are amping up recruiting efforts as best they can. A recruiting dead period just started Monday, which means contact between recruits and schools is severely limited over the next month. However, players will still be committing over that time frame. With the regular season over, it's the perfect time to take a look at the top recruiting classes in the nation. This list is based on Rivals.com rankings, as of Dec. 14th. The rankings will likely look very different come National Signing Day. With that in mind, here are The Nation's Top 10 Recruiting Classes Right Now:

The Aggies just barely edged out Oregon (No. 11) and Auburn (No. 12) for this spot. The Aggies have 19 players committed, including nine four star recruits. Rivals has A&M's top recruit as four-star OT Kellen Diesch. The Aggies have gone heavy on lineman, with eight of their recruits playing in the trenches.

The Irish are putting together another strong class under head coach Brian Kelly, with 19 players committed. Notre Dame has a five-star recruit and nine four-star commits. That five-star is LB Dealin Hayes. The Irish already have five defensive backs committed.

The Rebels have 18 commits, including one five-star. That's QB Shea Patterson, who looks like the future at QB for Ole Miss. He's the No. 3 recruit in the nation. The team has three RBs, two TEs and a WR to pair with Patterson.

Alabama constantly puts together highly-touted class under Nick Saban and this year shouldn't be any different. The Tide have 17 commits, with 10 of those being four stars or higher. Their lone five-star is OL Jonah Williams. Seven of Alabama's commits play on the offensive or defensive line. The Tide likely aren't done yet and could continue to rise. They lost a commit from the No. 1 kicker in the nation Monday.

The Seminoles have 17 commits, including a five-star and nine four-stars. DB Levonta Taylor is their five-star recruit. The Seminoles, strangely, have two kickers committed to their program.

The Gators already have 25 commitments, the most of any team in the Top 10. The team has no five-stars, although that could change if they're able to land QB Jacob Eason. The team recently flipped QB Feleipe Franks from LSU, although Franks could decommit from the Gators if they land Eason.

The Wolverines have 21 commits, including nine four-star players. Their current top recruit is OL Ben Bredeson. That could change if the Wolverines land five-star RB Kareem Walker, who will make his decision Thursday. Michigan is considered the favorite to land him, as Chat Sports reported months ago. The No. 1 recruit in the nation, DT Rashan Gary, is also expected to commit to Michigan. It's shaping up to be a strong first class for head coach Jim Harbaugh.

You weren't expecting Stanford to check in so high were you? Stanford has 20 commits, with one five-star and eight four-stars. That five star is LB Curtis Robinson. Also committed is four-star K.J. Costello, who could be the team's future at QB.

LSU nearly fired Les Miles, which could have ruined what is looking like a strong class. The Tigers have 17 commits, nine of which are four-stars. Eleven of those players are on the defensive side of the ball. The Tigers currently don't have a QB committed, since Franks flipped to UF.

Another year and another wonderful class for Urban Meyer and the Buckeyes. OSU has 17 players committed, including 13 four-star or better players. The top recruit is five-star DE Nick Bosa, the younger brother of current Buckeye DE Joey Bosa. Ohio State isn't done yet and could end up with the best class in the country at the end of the season.