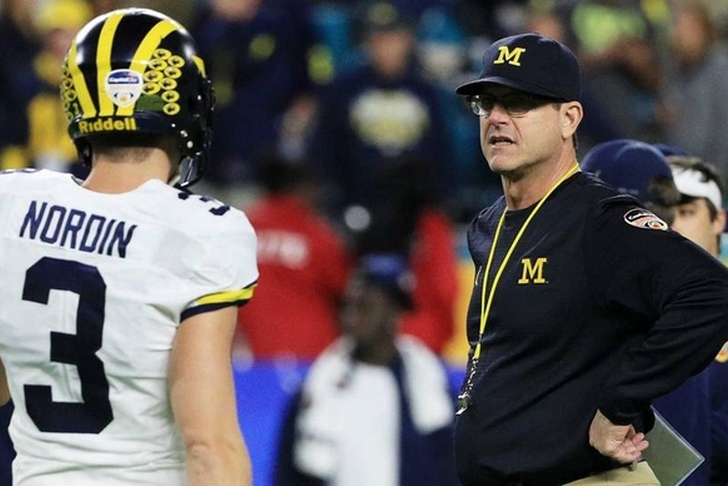 Many have been calling for the playoff to the expanded to six teams or even eight teams in recent years, and Michigan head coach Jim Harbaugh is among those who want to see playoff expansion. However, he thinks it should be expanded to 16 teams.

"They've got a great system," Harbaugh said on 97.1 The Ticket. "It's been in place for many years. My dad (Jack) won the national championship at Western Kentucky, when they were I-AA in 2002. I think that is the best system. When you look at every other sport, they have a playoff."

"Every other college sport does, and it's not a four-team system. Basketball goes from 64, I think, (it's 68) to the Final Four. I think that's the way it should be done to crown a national champion. Like they do in gymnastics. Like they do in basketball -- men's and women's. Lacrosse. Every other sport you can think of."

Opponents of playoff expansion think a larger postseason would lead to these athletes playing in too many games, increasing their risk of injury while also blowing up the current bowl system. Harbaugh didn't touch on bowl games but said the season should be shortened to 11 games with a 16-team playoff.

The current four-team playoff format was created in response to the criticism of the BCS where only two teams got to compete for the national title, but Harbaugh doesn't think that four teams are enough to determine a legitimate national champion.

"Some of these conferences that are 14 and 16 teams, you win your conference and only one team goes?," Harbaugh said. "One team may not have played the other good teams in the conference. We see that already in the Big Ten. Strength of schedule is a big determination of what your record is going to be.

"It doesn't have to be just one team from each conference. You could have 16 teams. They vote them in in the FCS. I think you could do that in the (FBS) as well."