Les Miles Hot Board: 6 Schools He Could Coach At Next Season 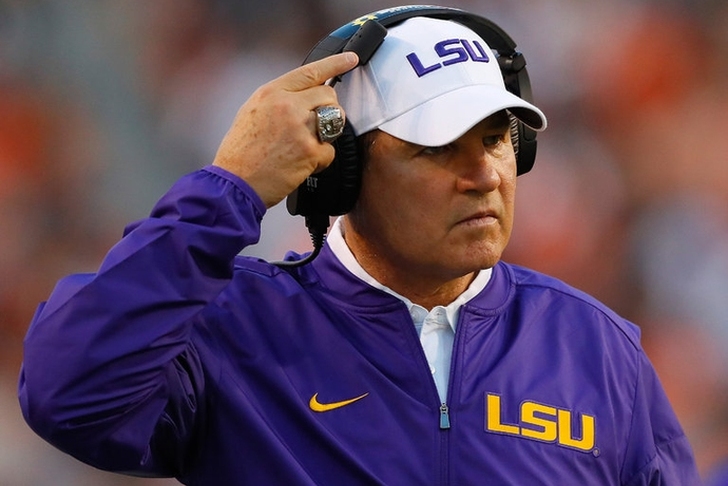 Les Miles being fired by LSU on Sunday wasn't exactly unexpected after he was nearly ousted at the end of last season, but it was a bit of a shock that it happened now instead of at the end of the season. Many are asking who LSU will hire to be their next head coach, but what is next for Miles? Assuming he still wants to coach next year, here are six teams he could join:

Baylor Bears
Miles first made his mark as Oklahoma State's offensive coordinator, then got his first head coaching job at the school before going to LSU, and he could make a return to the Big 12. Baylor is a program in transition as they move on from the Art Briles era, and Jim Grobe is not the long-term answer. The Bears aren't the tradition power of some of the other schools on this list, but they have championship-level talent - and Miles would have a chance to help continue to grow the program.

Texas Longhorns
Much like Miles, Charlie Strong was nearly fired before beating Oklahoma last year and finishing the season strong. He seemed to have solidified himself in the job by beating Notre Dame at the start of the season, but a loss to Cal has raised questions as to how far this program has really come. If they struggle in Big 12 play yet again, Strong could be on his way out. Miles is one of the biggest names available, so he'll be a top target.

Notre Dame Fighting Irish
Speaking of Notre Dame, there are rumblings that Brian Kelly could be out sooner or later as well. They're just 1-3 to start this season, and after losing to Duke this past weekend, they fired defensive coordinator Brian VanGorder. Many blame him for their troubles, but if Kelly doesn't get this season turned around soon, he could be on the way out as well.

USC Trojans
It seems crazy to think of USC making another coaching change, but Clay Helton is now just 1-5 since being named permanent head coach - including a 1-3 mark this season. Throw in rumors that he has already lost the locker room and many players are planning to transfer, and it explains why there are rumblings he already may be on the way out. He's in the first year of a five year deal, so they'll let him coach the remainder of the season - but if they don't win eight games this season, Helton may be gone.

Penn State Nittany Lions
It's becoming more and more clear each week that James Franklin is not the answer in Happy Valley. The Nittany Lions have seemingly never lived up to expectations since Franklin took over, and now that the NCAA sanctions have passed, he doesn't have that as an excuse. Their 2-2 record so far this season hasn't exactly inspired confidence, and Miles is someone with a proven track record. He'd be a definite upgrade.

Kentucky Wildcats
Does Miles want to stay in the SEC? If he does, Kentucky presents the perfect opportunity for him. Head coach Mark Stoops is on his last legs, and if the Wildcats don't make a bowl game, he will likely be fired. Miles will be able to recruit under the SEC umbrella, and playing in the East division would make his job a lot easier. Plus, it's a low-pressure gig, making it the perfect "retirement job" for him.