King's Korner: News, Rankings and the Bubble; the week that was in College Basketball 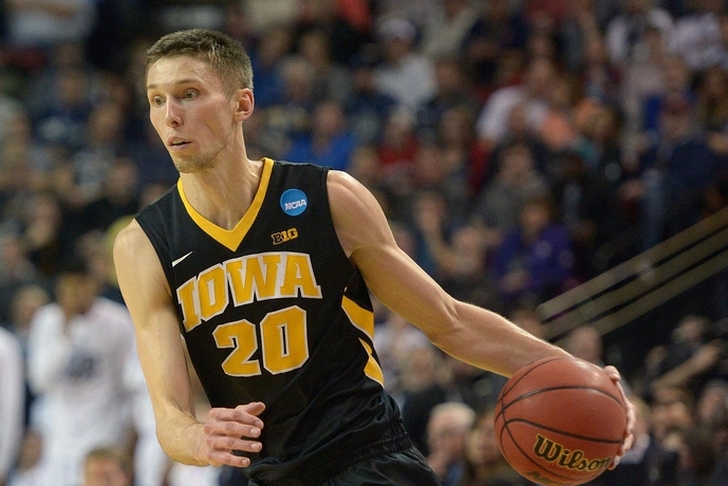 Happy New Year! With the new year comes conference play around the nation and draws us closer to March Madness. It was an upset filled week in college basketball with undefeateds becoming defeated, top 25 teams losing twice, a certain bird is flying high this week and another coach makes headlines.

1. And then there was three...
Last week there were five teams who were undefeated. It didn't take long for one of those five teams to fall as the former undefeated Michigan State Spartans fell to the Iowa Hawkeyes 83-70 on Tuesday December 29. The next to fall was the Xavier Bulldogs, who may have been thinking about their New Year's Eve parties instead of their game against Villanove, as they got crushed 95-64 at Villanova.

Oklahoma was tested by Iowa State but held on to win 87-83 on January 2nd and the test doesn't get any easier as they take on the Kansas Jayhawks tonight in a game to prove who is the power of the conference.

SMU faces a Cincinnati team on Thursday that hasn't looked like the same Bearcats team from the past few seasons. If SMU gets past them, their conference schedule favors them.

South Carolina is the only undefeated team in the SEC, it's not Kentucky, and Frank Martin has this team performing at new heights. The defense has held opposing teams to under 70 points in nine of their 13 games. Their opponents this week are Auburn and Vanderbilt.

2. The Iowa Hawkeyes (there's the bird) defeated back-to-back ranked teams in #1 Michigan St. and #14 Purdue
Iowa has won eight of their last nine games, with the one loss being a one-point loss to Iowa State, who was then ranked No. 4. Senior leadership is spearheading this surge from Iowa and should continue to lead them throughout the season. They only play one game this week against Nebraska before taking a nine day break, prior to another matchup with Michigan State.

The Hawkeyes will need to lean on their leadership and coaching to not fall flat in the long hiatus.

3. First-year Arizona State Head Coach Bobby Hurley loses it and is ejected after receiving two technicals within twenty seconds against Arizona.
Bobby Hurley knew the importance of this home game against Arizona and may have let his emotions get the best of him. According to Pete Thamel of SI.com, Hurley has long had an issue with officials, citing rumblings from the MAC the past two seasons. After the game Hurley was quoted "I really wouldn't have changed anything that I did today, in terms of anything that happened."

He also said that the "spotlight should be on the guys in the game," he continued "not the coaches or officials, but the players, the players should decide the game." You can see the video of Hurley's freak-out below.

Additions: Iowa, Dayton, Pittsburgh, UConn
Iowa comes in at 19 after defeating two ranked opponents. They should have no real trouble with Nebraska this week. Dayton scrapes in at 25 with an 11-2 record after defeating Arkansas and Duquesne. Pittsburgh has only one loss on the season and playing some great basketball. It's a shock they weren't here sooner. UConn is at 23 in this weeks poll, and with games against Temple and Memphis on the docket, the team could fall right back out with one loss.

Drop outs: Utah, Cincinnati, Baylor, UCLA
Utah and UCLA drop out of the top 25 after neither team was able to get a win in any of their four contests. Each dropping a pair of games a piece. Cincinnati suffered a loss to Temple and their fourth overall causing them to fall from the ranked. Baylor was destroyed by Kansas 102-74, enough to drop the Bears from 23 to unranked.

IN: Hawaii, Oakland
Hawaii was in the "who's out" section last week. However after two more impressive wins over not-so-tough competition, the Warriors have proven that they are a much superior team to those opponents. In fact, aside from a one-point victory over Nevada, each of their other ten wins have been by at least eleven points.

Oakland University has one of the best players in the nation and he is only 5' 9". If they are still in the picture come March but on the bubble the name Kay Felder could be enough to get them a spot. One of the most exciting players to watch, Felder is averaging 26.4 points per game (second in nation) and 8.9 assists per game (leads the nation). The Golden Grizzlies are 9-5 with a win over Washington and a six-point loss to Michigan State.

OUT: LSU, Northern Iowa
LSU needs Ben Simmons to score 36 points to win, like they did against Vanderbilt. Simmons is trying to balance being too selfish and too passive. For the Tigers to make it in they need him to be more agressive and have more games where he scores 25+ rather than work to get everyone involved. We will see if they can figure it out. For now, they are just barely out.

Northern Iowa has two victories over top-5 teams but also some eye-catching losses. With losses to a struggling New Mexico team, big losses to Hawaii and Richmond and a loss in conference play to Southern Illinois. Inconsistency has been a problem in the young season and unless they can solve some of the issues, they may miss the dance.