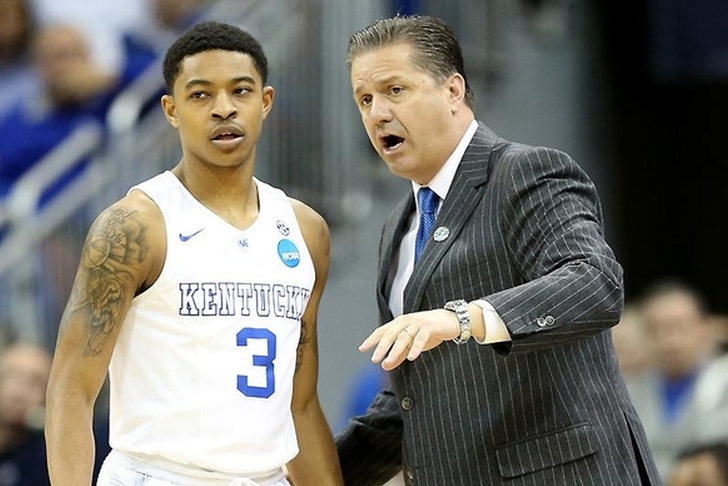 The Kentucky Wildcats controlled this battle of college basketball powers from start to finish, hanging on to beat the defending national champion Duke Blue Devils 74-63.

Kentucky's three-man backcourt of Tyler Ulis (18 points, six assists), Jamal Murray (16 points, five assists), and Isaiah Briscoe (12 points) constantly pushed the tempo and were major factors on both ends of the court. Forward Marcus Lee also had a dominant game for the Wildcats, posting a double-double with 10 points and 10 rebounds before fouling out.

UK's defense also played a big factor in their win as they frustrated Duke's two star players, guards Grayson Allen and Brandon Ingram, all night. The duo, who averaged 45 points per game coming into this game, combined for just 10 points on 3/17 shooting.

Seniors Marshall Plumlee (12 points, 10 rebounds, six blocks), Matt Jones (16 points), and Amile Jefferson (16 points, 15 rebounds) kept Duke in this one, but didn't get much help from anyone else.

Kentucky freshman Skal Labissiere, the No. 2 rated incoming freshman, was limited to just seven points and four rebounds before also fouling out.

The Wildcats' next game is at home against Wright State on Friday, while Duke will try to rebound Friday at VCU.