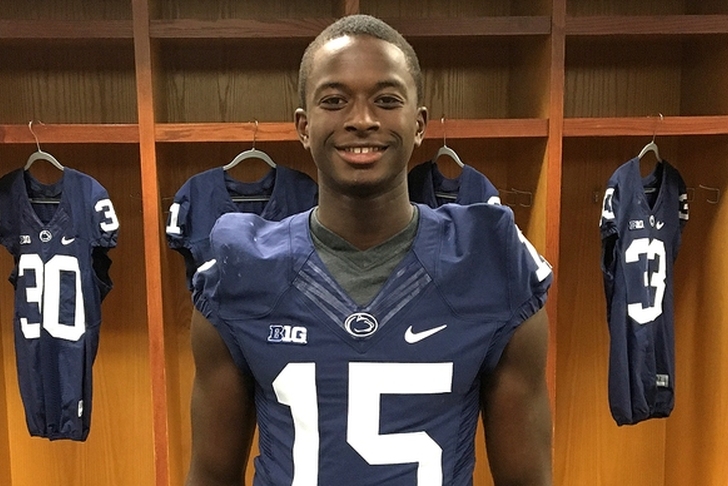 This was the last weekend for schools to host recruits before the Early Signing Period begins. The second (and original) date for National Signing Day is on February 7th, which means not every recruit has to make a decision this coming week. With so many great players not committed to a school, it will be a fun couple of weeks.

The 2018 recruiting class is loaded at the wide receiver position. Four of these top 10 prospects have already committed, giving those programs an added boost.

Here are the 10 highest-rated wide receivers in the 2018 class and the schools they will attend:

10.) Justyn Ross - #58 overall, 4 Stars
Prediction: Clemson
Ross was a basketball star in high school because of his long stature standing at 6-4. His combination of size, speed, and technique give him great upside. He has visited Auburn and Clemson the past few months but it appears that Clemson will be his likely choice.

9.) Jacob Copeland - #53 overall, 4 Stars
Prediction: Alabama
Copeland plays with a certain toughness that will make him a great wide receiver in the SEC. The top three schools on his list are Florida State, Alabama, and Florida after he decommitted from Florida following the firing of Jim McElwain. He is expected to be going to the Crimson Tide.

8.) Marquis Spiker - #51 overall, 4 Stars
Commitment: Washington
Spiker is a tall but thin receiver entering college. Standing 6-3 and weighing 190 pounds, he's an ideal red-zone target but will need to add some weight to be successful in the middle of the field. He is ranked as the seventh-best recruit out of the state of California and has decided to go north to play at Washington.

7.) Jaylen Waddle - #50 overall, 4 Stars
Prediction: Texas A&M
Waddle lacks ideal size and will need to bulk up once he's in college, but he possesses athleticism that is hard to come by. He makes up for that size with his speed. The top two schools fighting for him are Alabama and Texas A&M, and with him growing up in Texas and his most recent visit being the Aggies, that's where we predict he ends up.

6.) Brennan Eagles - #48 overall, 4 Stars
Commitment: Texas
Eagles has a great combination of size and athleticism that makes him one of the nation's top receiver prospects in the 2018 class. He possesses outstanding size and has plenty of room to grow even larger once he's playing at the next level. He will be taking his talents to Texas and help the Longhorns get back on top of the Big 12.

5.) Derion Kendrick - #42 overall, 4 Stars
Commitment: Clemson
He is a dynamic wide receiver who has a chance to go the distance every time he touches the football. He needs to improve his blocking and route running to truly be elite in college. He is committed to Clemson and has been since January 2017.

4.) Devon Williams - #21 overall, 5 Stars
Prediction: Oregon
Williams' college career could go a few different ways due to his size and natural ability. He is 200 pounds and stands at 6-4, but if he adds enough weight, he could turn out to be a tight end.  Williams is from Lancaster, CA, which is why he was heavily considering Pac-12 schools, but it seems like he will choose Oregon - who he said were his favorite in July.

3.) Justin Shorter - #15 overall, 5 Stars
Commitment: Penn State
A big tall receiver standing at 6-4 and weighing 213 pounds, Shorter still needs to improve as a route runner but his leaping ability and overall ball skills will make him a great threat in the red zone.

2.) Amon-Ra St. Brown - #12 overall, 5 Stars
Prediction: USC
St. Brown is a smaller receiver but is a terrific route runner already at a young age. His brother is Equanimeous St. Brown, a WR at Notre Dame. He is a dangerous kick/punt returner and could be an all-around stud in college. He is from Anaheim, California, and he has visited UCLA, Stanford, and USC. He has also visited Notre Dame, which is one of his top two choices, but it seems like he will stay in his home state, playing for USC.

1.) Terrace Marshall - #11 overall, 5 Stars
Prediction: LSU
The number one wide receiver prospect has the tall frame and natural athletic ability, which is why so many schools are after him. The top three schools for Marshall are Florida State, LSU, and Texas A&M. Marshall is from Bossier City, LA and his last visit was on November 24th to LSU, giving the Tigers an edge.