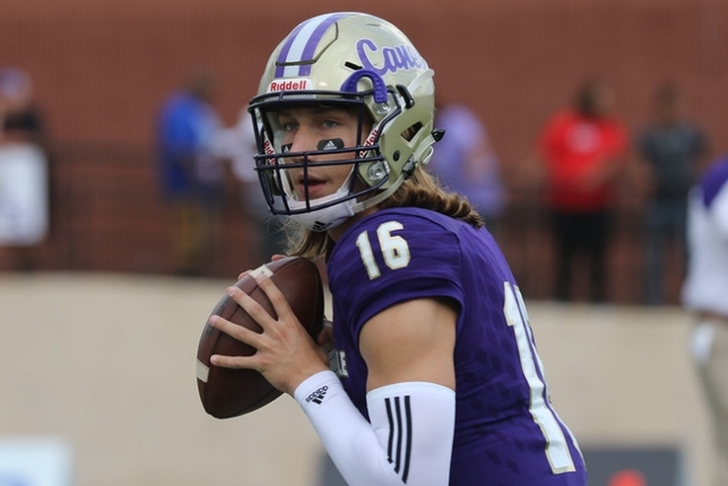 The 2018 recruiting class is taking center stage with early signing day coming this week, and it's a class that's loaded at the quarterback position. Nine of these top 10 prospects have already committed, giving us a good indication of how the college football landscape could look in the next three years. Here are the 10 highest-rated quarterbacks in the 2018 class and the schools they will attend:

The 6-foot-5, 226-pounder has been committed to Washington since December 2015, showing the Bothell native's desire to stay in-state. He's a big quarterback with a big arm and is the top-ranked prospect in the state.

Yankoff and Sirmon figure to be in a heated battle to replace Jake Browning in Seattle. He's a dual-threat quarterback while Sirmon is more of a pro-style dropback passer, and that versatility - he threw for nearly 2,400 yards and rushed for over 1,000 as a HS senior this past season - is an asset in Washington's system.

The 6-foot-5, 215-pounder is the No. 5 rated dual-threat quarterback in the country and is in line to eventually replace Brandon Wimbush as Notre Dame's starter. He's been committed to Notre Dame since May 2016, though many believe there's a chance he flips to Ohio State.

Speaking of flipping, Corral backed off his Florida pledge for Ole Miss last week. The No. 3 pro-style quarterback in the country did not feel he was a fit in new Florida head coach Dan Mullen's system and chose the Rebels after Shea Patterson's decision to transfer to Michigan. He figures to see the field for Ole Miss sooner rather than later.

Jones committed to Ohio State in July 2016 just one week after attending a camp there, spurning in-state Georgia for the Buckeyes. However, Alabama is working really hard to flip this talented prospect.

The No. 3 dual-threat quarterback figures to be an excellent fit in new head coach Chip Kelly's system and should have a legit chance to win UCLA's starting quarterback job should Josh Rosen declare for the NFL Draft as expected. He showed incredible efficiency has a passer as a senior, throwing for 3,278 yards with 38 touchdowns and just three interceptions.

Rogers is a talented 6-foot-4, 210-pounder who has a rocket arm with excellent rushing ability. He'll have a great chance to earn TCU's starting job next fall in the post-Kenny Hill era.

The pro-style quarterback stands tall in the pocket at 6-6 and can throw the ball downfield. He has high football intelligence and shows natural leadership in the huddle. The top choices for McKee are Alabama, Texas, and Stanford with Stanford being the favorite.

Fields is the No. 2 overall prospect in the country, marking the third-straight year in which Georgia has received a commitment from one of the nation's top quarterbacks. The 6-foot-3, 221-pounder had originally committed to Penn State in December but decommitted in June. He's a great runner with a big arm, and while he needs to work on his accuracy, he can do everything on the field.

Lawrence was the top overall player in this class for several years before losing that position to Fields, but he got it back earlier this month. He gave his verbal pledge to Clemson in December 2016 and is set on being Clemson's quarterback of the future.