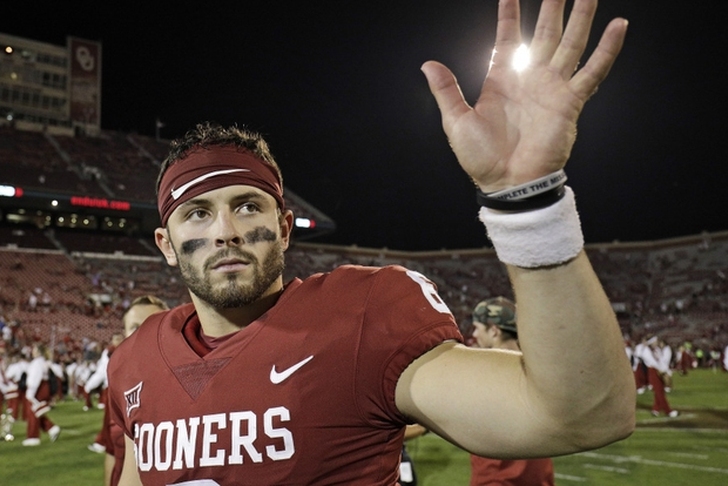 Most colleges are either known as "football schools" or "basketball schools," but there are a select few that have top programs in both sports and have produced top talent in each. In fact, there are only 13 schools that have produced a No. 1 overall pick in both the NFL and NBA drafts. Here are those schools, sorted by their most recent No. 1 pick.

The Sooners have seen a terrific run of success this decade when it comes to No. 1 overall picks. Mayfield is obviously the latest, being picked by the Browns with the top selection in the NFL Draft last week, but Bradford and Griffin are also recent top selections that have become stars. Those two also made Oklahoma the only school ever to have both the Heisman winner and Wooden Award winner in the same year.

It's tough to find a wider range of top picks than what LSU has. Shaq is one of the best players in NBA history and Simmons is well on his way to becoming a superstar. In the NFL, Russell is arguably the biggest bust in league history.

Couch isn't a bust but had an underwhelming career with the Browns, though a lot of his struggles can be blamed on the lack of talent around him. However, in basketball, Kentucky has seen a ton of success in the John Calipari-era. All three of their top picks are All-Stars and among the league's best players

Harmon only played two seasons for the Rams after military service before he pursued a career in Hollywood. Long was the more successful player with four Pro Bowl appearances on his resume before injuries slowed his career. In basketball, Webber and Russell were both stars but bounced around the league.

Greg Oden is known as one of the biggest busts in NBA history as he was drafted ahead of Kevin Durant, but he looked like the next great NBA big man before injuries derailed his career. It's a bit of a surprise that Ohio State hasn't produced a top NFL pick since 1997 but this shows the top-end talent they had under head coaches Woody Hayes and John Cooper.

Williams was the surprising No. 1 pick over Reggie Bush and Vince Young but may have had the best career in a largely disappointing draft class. Thompson was not a surprise pick as he was the top selection in both the NBA and ABA drafts and is in both the Pro Basketball and College Basketball Hall of Fame.

Smith and Bogut represent the only time a school had the No. 1 picks in both the NFL and NBA drafts in the same year. Smith is a three-time Pro Bowler who is a quality start but isn't a star. Injuries largely limited Bogut's NBA career, but he proved to be a quality defensive big who won a title with the Golden State Warriors.

Davis won the Heisman in 1961 but was never able to have an NFL career after being diagnosed with incurable leukemia and dying just one year after being draft. Coleman was the Rookie of the Year and an All-Star for the Nets, but he never became a true star player.

Bill Walton and Lew Alcindor (who changed his name to Kareem Abdul-Jabbar) are the two biggest stars of the John Wooden era and became legends in the NBA. Abdul-Jabbar is the leading scorer in league history. Aikman is a Hall of Famer himself, having led the Cowboys to three Super Bowl titles in the 1990's.

Dudley served in World War II before being a rushing champion and league MVP during his Hall of Fame career with the Steelers and Ravens. The 7-foot-4 Sampson was expected to dominate the NBA and did for a time with Hakeem Olajuwon in Houston before injuries derailed his career.

Magic Johnson led Michigan State to a national championship and then led the Lakers to five NBA titles, cementing himself as one of the top five NBA players of all-time. Smith is best known for his role in the Police Academy movies which game after a decent NFL career.

Davis only played four seasons in the NFL before serving America in World War II. Bellamy is the most successful of the group as a four-time All-Star and a Hall of Famer while Benson, part of IU's undefeated champs in 1976, had a journeyman career.

Notre Dame produced a large number of top picks during their dynasty in the 1940's and '50's, though Hall of Famer Paul Hornung was probably the most successful during his run with the Green Bay Packers. Carr had a great career and while he's not in the Pro Basketball Hall of Fame, his No. 33 is retired by the Cleveland Cavaliers and is a member of the College Basketball Hall of Fame.