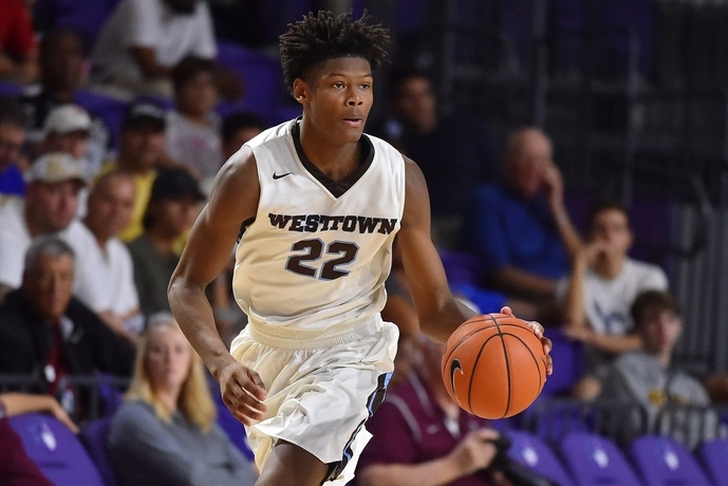 Freshmen seem to rule the college basketball world now, as all of the top high schoolers can often determine a college program's success for the next season before they move to the NBA. The current 2018 class has plenty of star power at the top and could re-shape the college basketball landscape next year with four prospects on this list still uncommitted. Here are the top 10 recruits, according to the 247sports Composite, that will take the country by storm during the 2018-19 season:

Bazley is Syracuse's highest-rated commit since 2007 (Donte Green) and has risen from an unrated prospect early in his recruitment all the way to the top 10. He has already signed his letter of intent and will give the Orange an extremely versatile player who can do everything on the court.

The brother of former Duke point guard and current Minnesota Timberwolves backup Tyus Jones, Tre is following his brother's footsteps, going to Durham as the top point guard in the country. A true point guard who is a bit more athletic than his brother, Jones will get to make the most of his playmaking ability playing alongside two other players that appear later on this list.

Little is UNC's highest-rated commit since James Michael McAdoo in 2011 and will immediately provide the Tar Heels with a dynamic slasher on the wing. He has the potential to be one of the best defenders in the country as soon as he steps on campus.

There's a chance that Simmons will bypass college to enter the NBA Draft - he's eligible since he's spending this year post-grad at IMG Academy - but should he pick a college, Florida, Tennessee, and Vanderbilt appear to be the favorites to land him. Simmons needs to add strength but is extremely athletic and excels at finishing around the rim.

Montgomery decommitted from Auburn in the wake of the FBI investigation, and while the lanky big man is still considering the Tigers, there's a chance he bolts elsewhere after already taking visits from Georgetown, USC, and Wake Forest. He obviously will benefit from a college weight program, but his speed and athleticism make him a matchup nightmare at the four position.

Langford, an Indiana native, will end up either at Indiana, Kansas, or Vanderbilt. He's a long, lanky shooter who can also attack the paint and finish around the rim, making him virtually unguardable.

The lone Pac-12 commit on this list, Bol Bol - son of former NBA player Manute Bol - picked the Ducks over Kentucky. He is still developing but has some reliable post moves - and his size is obviously a major plus.

You've probably seen Williamson from his plethora of viral dunks, and that leaping ability and athleticism have propelled him to the top uncommitted recruit in the country. His recruitment is still pretty wide open as he is considering Clemson, Duke, Kentucky, Kansas, and North Carolina.

Barrett (who I evaluate as the top prospect in the country) is one of the top two prospects in the country, both of whom are going to Duke. He led Canada to the U-19 title over the United States team because of his ability to really do anything. Though he's listed as a small forward, he has the ball-handling and passing abilities to play point guard along with the athleticism and scoring ability to play the two. His size and length also give him a lot of defensive upside.

Reddish has leapfrogged Williamson and Barrett to be the top prospect in the 247sports Composite thanks to his size, length, and shooting ability. He needs to be more consistent and to continue to get stronger, but he's got everything - including the defensive prowess - you could want in a prospect.