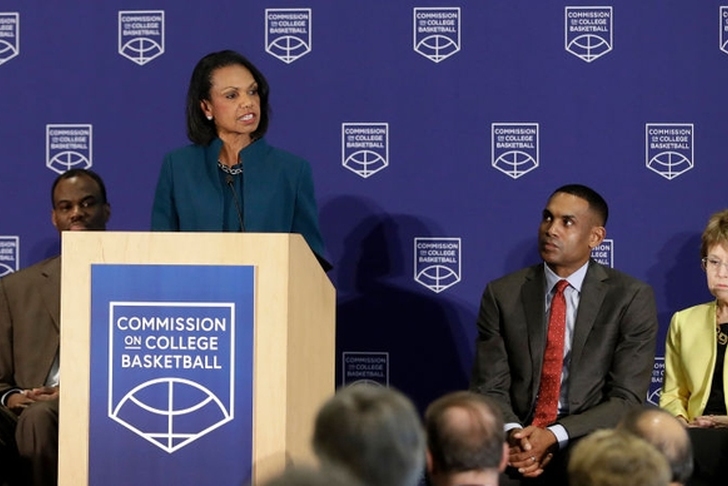 The new Committee on College Basketball, formed by the NCAA in response to the FBI investigation into corruption and bribery in the sport, released their recommendations in a 60-page report and press conference on Wednesday morning. Among the committee's major recommendations are to end the one-and-done rule, more severe penalties for coaches and schools who violate NCAA rules, and changes to relationships between the NCAA, schools, players, and apparel companies and agents.

"We need to put the college back in college basketball," commission chairman and former Secretary of State Condoleezza Rice said. "Our focus has been to strengthen the collegiate model -- not to move toward one that brings aspects of professionalism into the game."

You can read the whole 60-page report here, but here are the biggest takeaways from the committee's recommendations:

1) More player freedom when it comes to the NBA
Perhaps the most needed (and obvious) reform is to eliminate the one-and-done rule and give players more freedom when it comes to pursuing a professional career. Eliminating the one-and-done rule would allow for players to enter the NBA Draft out of high school, which the committee said would help separate the "college track" from the "professional track."

Furthermore, the committee recommends that players should retain their collegiate eligibility should they enter the draft, go undrafted, and don't sign a professional contract, allowing them to return to school the following year.

"The most significant thing is that the dialogue has been opened up," committee member and Hall of Famer David Robinson told ESPN's Get Up on Wednesday. "All these different constituents [NBA, apparel companies, NCAA, coaches, administrators] ... came to the table to discuss some of these matters, which were in silos before. It opened up a tremendous dialogue.

"I think we all agree we have to do what's in the best interests of these kids. We have to give them options, open up their eyes to the reality of the situation: 'What percent of you are going to play in the pros?' The rest of them need an education. That is what's going to be the real value here -- going to college. Not so you can skip through college and get to the NBA as quickly as possible."

According to ESPN's Adrian Wojnarowski, the NBA and NBPA are discussing eliminating the one-and-done rule for the 2020 draft.

2) Much stricter penalties
To me, these were the best recommendations the committee made. They recommended that coaches receive a lifetime ban for committing major violations and that programs receive a five-year postseason ban for Level I violations - the most serious NCAA violations.

"Currently, the rewards for violating the rules far outweigh the risks," Rice said.

If you're going to discourage cheating, making the penalties this severe are certainly the right way to go about it. We've seen coaches be suspended for a number of conference games for infractions and be hit with show-cause penalties, keeping them out of the sport for a number of years. However, the committee is recommending that a coach's career ends if they commit major violations, stopping major violators from resurrecting their careers at smaller schools.

"It is time that the money flowing from apparel companies and other third parties into non-scholastic basketball be disclosed and accounted for in order to address the corruption we see in the sport," Rice said.

College basketball has plenty of issues that need to be addressed and many are disappointed those other issues aren't addressed. But these recommendations are designed to limit the window for corruption and the amount of corrupt money entering the sport - which is a good start.

4) The Committee is asking for help from everyone
This is another rightful criticism of the committee's recommendations - they're seemingly asking for help from everyone else as opposed to the NCAA finding solutions on their own. They're asking the NBA to change their draft requirements and process, they're asking for shoe companies to really limit their role in youth basketball (particularly when it comes to summer circuits), and for USA Basketball to have more control over summer basketball along with the NCAA.

To be fair, a lot of the avenues to corruption in college basketball are indirect results and effects of the decisions of other entities, which is why these recommendations are relying on others. But some tangible solutions for the NCAA would've been nice.

5) More needs to be done
We touched on this above, but these recommendations don't "fix" college basketball. They help, but there is much that still has to be done - the most pressing of which being how to fairly compensate the athletes that are providing this multi-billion dollar business. However, the committee chose not to address the topic.

“We don’t believe that the NCAA can legislate in this area until the legal parameters become clearer,” Rice said, citing current litigation.

That's the big issue and we need to find an answer to it sooner rather than later.