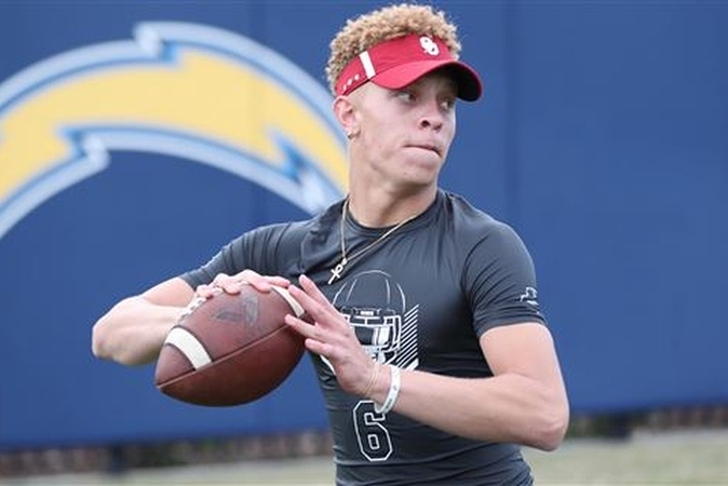 The 2019 recruiting class is taking center stage this week with the release of the Elite 11 QBs, and it's a class that's loaded at the position. 10 of these top 12 prospects have already committed, giving us a good indication of how the college football landscape could look in the next several years. Here are the 12 quarterbacks that were named to the 2018 Elite 11 and the schools they will attend:

The Phoenix-native doesn't have elite size at 6-foot-2 and 180 pounds but is an extremely accurate passer and can make plays with his legs. Rattler is the nation's top-ranked pro-style passer and committed to the Sooners in June 2017.

Nix is expected to compete for the starting job at Auburn after Jarrett Stidham graduates and has a ton of upside as a mobile, accurate passer. The nation's top dual-threat quarterback should be a great fit in head coach Gus Malzahn's system.

Daniels is a dynamic playmaker who may have more upside than any other quarterback in his class. Though he hasn't committed yet, UCLA is thought to be the favorite. His rushing ability would make him a must-watch in Chip Kelly's offense.

The No. 2 pro-style quarterback in the country is already pretty polished in the pocket and has an incredible amount of arm talent. He'll compete with Georgia transfer Jacob Eason for the starting job in 2019.

The Monroe, NC native committed to Florida State in April and appears to be Willie Taggart's quarterback of the future. He really excels with his running and ability to extend plays but, as seen in the video above, has plenty of arm talent.

Among the quarterbacks who have already committed, no one is receiving more interest from other schools. Mertz is a very natural thrower and is still hearing from Clemson, Michigan, Notre Dame, and Ohio State.

Hilinski is the biggest of all the Elite 11 quarterbacks at 6-foot-4 and 222 pounds, and that translates to his arm strength. He's the No. 6 pro-style passer in the country and committed to South Carolina on April 4.

The brother of current Alabama starter and national championship game hero Tua Tagovailoa, Taulia is a great candidate to win the job when his brother leaves for the NFL. He's on the smaller side but is mobile and extremely accurate.

One of the better all-around quarterbacks in the class, McNamara needs to add weight but is very smart and has great arm talent. He was originally committed to Notre Dame before flipping to the Wolverines.

The No. 8 dual-threat quarterback in the country is very smart, takes care of the football, and is an extremely accurate passer. He's also smaller at 6-foot-2 and 190 pounds, but the rest of his game is solid.

Though he's a three-star prospect, Evans has been one of the fastest risers of the offseason and should see his rank continue to rise. He's known as a complete quarterback who makes good decisions and rarely throws interceptions.

West Virginia is currently the favorite to land the 6-foot-4, 190-pound Florida native, and he has seen his stock rise drastically during the camp circuit due to his big frame and strong arm.