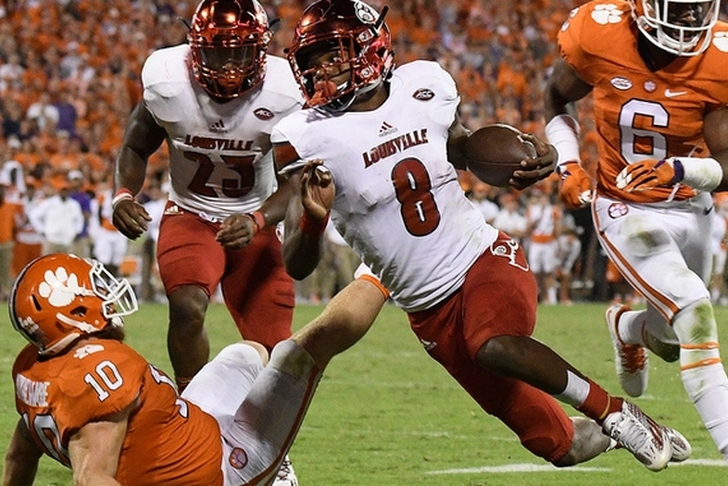 Quarterback is undoubtedly the most important position in football, and in college, having a difference maker under center (or in the shotgun) can be the difference in making a New Year's Six Bowl or missing the postseason altogether. The debate over which QB is the best in the country is largely arbitrary, but the experts at Pro Football Focus have used their scouting system to determine the top 10 in the country so far. Here's their list:

PFF: "Trubisky earned an awful grade in UNC’s big loss to Virginia Tech on Saturday, which was played in inclement weather conditions related to Hurricane Matthew, but we’ll keep him on for one more week to see if he can rebound against Miami this weekend. Even with last week’s struggles, Trubisky is still at or near the top in several key categories, including adjusted completion rate when under pressure, a stat in which he ranks second nationally at 73 percent."

PFF: "The Bears haven’t yet reached the meat of their Big 12 schedule, but Russell deserves a spot on this list based on how well he has graded through his five games so far this season. He was one of the highest-graded QBs in the country last year prior to a season-ending neck injury, and is once again proving to be a potent dual-threat quarterback. He is getting the ball out very quickly, with the fourth-fastest time to throw in the nation, and benefiting from Baylor’s heavy play-action attack." PFF: "Allen took a step back in these rankings after earning an average grade in the Razorbacks’ loss to Alabama, but he deserves something of a break after having to face the Crimson Tide’s scary-good defensive front. He was under pressure on an absurdly high 69 percent of his dropbacks in that loss, and for the season he’s been under pressure on 47 percent of dropbacks, the highest rate in the country." 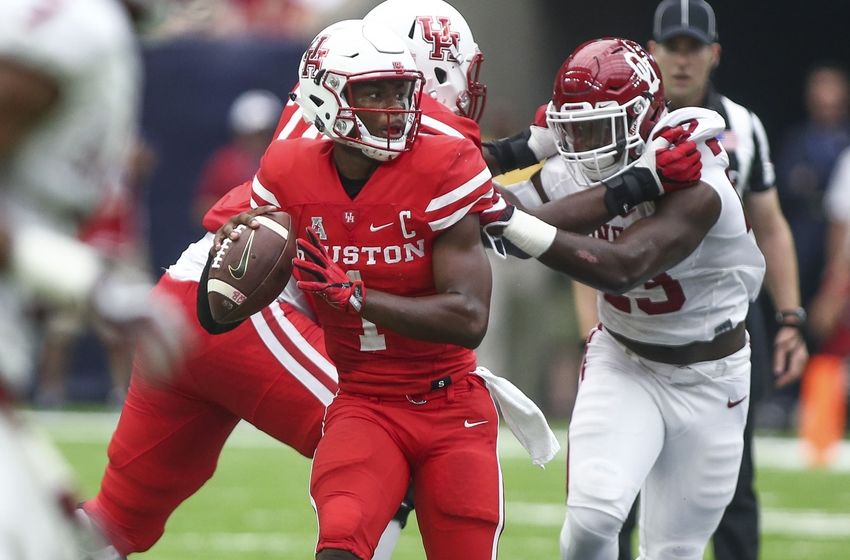 PFF: "The Cougars may have seen their playoff hopes dashed with their upset loss to Navy over the weekend, but Ward nonetheless belongs on a list of the best quarterbacks in the country. He ranks eighth nationally in adjusted completion rate, throwing on target on 76 percent of his passes so far this season, and he graded very well in the loss to the Midshipmen. He completed 32 of 47 aimed passes for 358 yards, three touchdowns and two interceptions, and was very dangerous as a runner, adding 99 yards and a touchdown on 15 carries, with 57 of those yards coming after contact in part due to his four broken tackles." PFF: "Kelly once again found himself in the headlines this week for off-field reasons, but he has a chance to get everyone focused back on his on-field play this weekend in the Rebels’ critical road game versus Arkansas. He is prone to some inconsistency in his play, but his best is on par with any of the top QBs in the country. 19 percent of his pass attempts are of 20 or more yards downfield – a very high rate – and he has been on target with 55.9 percent of them, the highest rate in the nation." PFF: "PFF’s top-graded returning quarterback from the 2015 season reappears on this list after a very strong performance in the Sooners’ win over Texas Saturday. He earned his highest game grade of the season so far, going 4-for-5 for 186 yards, two touchdowns and zero interceptions on passes thrown 20-plus yards downfield. He also displayed a lot of the elusiveness that was his calling card a year ago, grading positively as a runner, and on the season his passer rating of 131.1 on dropbacks where his time in the pocket is 2.6 seconds or more is highest among Power-5 QBs – a sign of his ability to extend plays and create when the initial play breaks down." PFF: "No quarterback has earned a better passer rating this season than Browning, who after a very impressive true freshman season has the Huskies poised for a playoff run with his strong play in his second year. His 77.3 percent adjusted completion rate is fourth in the country, and he has been excellent when the opponent’s pass rush gets to him, and has a near-perfect passer rating of 147.1 when blitzed, completing 35 of 45 throws for 441 yards, six touchdowns and zero interceptions." 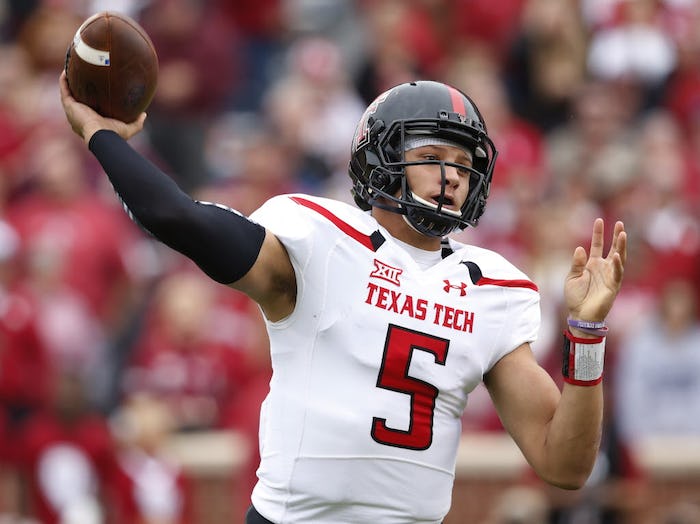 PFF: "The Red Raiders suffered their first conference loss against Kansas State on Saturday, but Mahomes still graded very well, and remains one of the top QB performers in the country through six weeks of the college football season. He currently ranks second nationally in passer rating, first in adjusted completion rate and third in deep adjusted completion rate, and has proven yet again this season just what a threat he is with his legs, having earned 135 of his 253 rushing yards, four of his six broken tackles and three of his seven touchdowns on scrambles." PFF: "Watson continues his climb in PFF’s QB grades after his sluggish start to 2016, earning a very good grade in the Tigers’ blowout win over Boston College last Friday. After earning the third-highest overall grade among Power-5 QBs this season, Watson once again appears poised to make a Heisman run and finish the year at or near the top of PFF grades. Against the Eagles he earned a near-perfect passer rating of 153.3 on aimed throws, completing three of his four deep attempts for 102 yards and a touchdown." 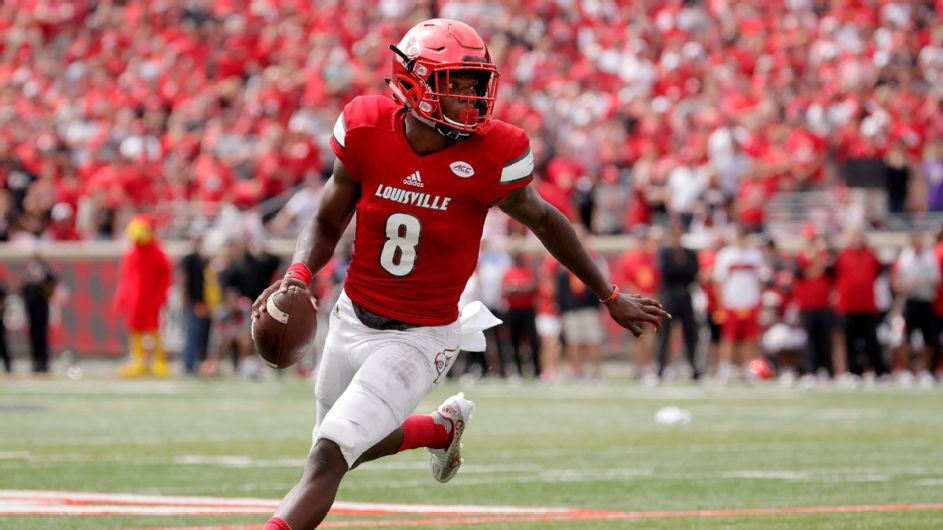 PFF: "It was a bye week for Jackson and the Cardinals, who return to action Friday night in a home game versus Duke. Jackson is by far the top-graded runner among college quarterbacks so far this season, having forced an incredible 26 missed tackles through five games. But what has him in the forefront of the Heisman discussion and at the top of his ranking has been his improvement as a passer, ranking 28th in PFF passing grades after ranking 130th a year ago. He has been great throwing the deep ball, earning an adjusted completion rate of 47 percent (sixth-best in the country), despite deep balls making up 23.7 percent of his attempts, the fourth-highest rate in the nation."