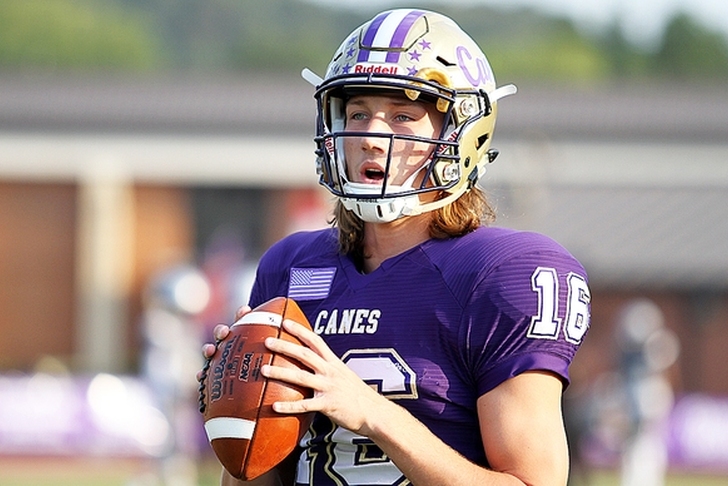 The 2018 recruiting class is taking center stage with the 2017 class now in the books, and it's a class that's loaded at the quarterback position. Eight of the top 10 RB prospects have already committed, but none of them have completely shut down their recruitment - and the ones that haven't committed are still considering many different programs. Here are the 10 highest-rated quarterbacks in the 2018 class and the schools they are considering:

10) Jack West - Stanford Cardinal
West is from Saraland, Alabama, but has spurned both the Tide and Auburn to commit to Stanford, where he committed in July. He has said he is solid on that commitment, but Alabama is still trying to land him.

9) Cameron Rising - Oklahoma Sooners
The No. 5 pro-style quarterback in this class has been committed to Oklahoma since August, and is expected to compete for the job as a freshman after Baker Mayfield graduates. UCLA and Texas are both working hard to flip him at this time.

8) Artur Sitkowski - Uncommitted
The 6-foot-4, 220-pounder is ranked as the No. 4 pro-style quarterback and No. 75 overall prospect in the country, and appears to be heavily favoring Florida. However, the Old Bridge, NJ native also has Rutgers on his list and is high on Tennessee after receiving an offer from the Vols on Feb. 3.

7) Dorian Thompson-Robinson - Uncommitted
Jordan's quarterback at Bishop Gorman High School in Las Vegas, Thompson-Robinson is the fourth-ranked dual-threat quarterback in this class. He is already favoring Michigan, but Jedd Fisch was his primary recruiter before he left for UCLA. Because of that, the Bruins are Michigan's biggest competition.

6) Justin Fields - Penn State Nittany Lions
Fields gave his verbal commitment to Penn State in December, yet that doesn't mean he has shut down his recruitment. The No. 3 dual-threat quarterback is still heavily considering Georgia and Alabama.

5) Phil Jurkovec - Notre Dame Fighting Irish
The No. 2 dual-threat quarterback in the country at 6-foot-5 and 190 lbs., Jurkovec has been the prize of Notre Dame's recruiting class to this point. He committed to the Irish way back in May and has held firm on that, making several unofficial visits to South Bend during the fall. At this point, Ohio State is the biggest threat to flip him.

4) Emory Jones - Ohio State Buckeyes
Jones committed to Ohio State in July just one week after attending a camp there, spurning in-state Georgia for the Buckeyes. The No. 23 overall prospect in the country is also receiving continued interest from Tennessee.

3) Jacob Sirmon - Washington Huskies
The top player in Washington committed to the Huskies back in December 2015, and has held firm ever since. Because of that, it's hard to imagine the 6-foot-4, 218-pounder ever flipping his commitment.

2) Matt Corral - USC Trojans
Corral has been committed to USC for nearly a year, and seems poised to take over for Sam Darnold whenever he eventually moves on to the NFL.

1) Trevor Lawrence - Clemson Tigers
The good news for Clemson is that they already have the top player in the class committed. He gave his verbal pledge in December and is set on being Clemson's quarterback of the future.