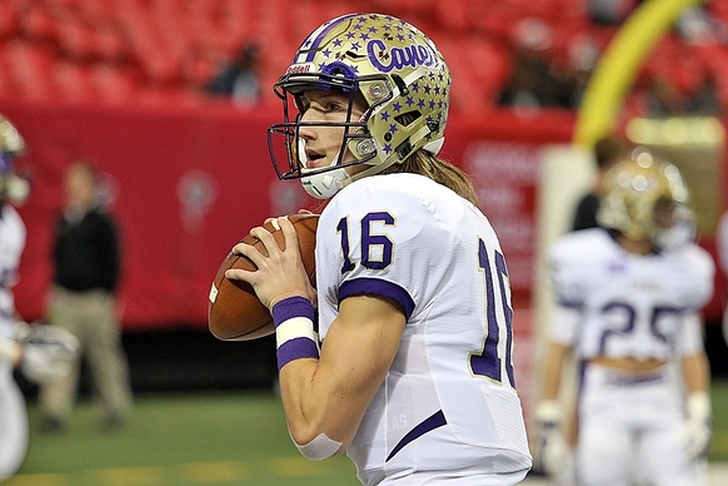 While most of the college football recruiting world is focused on the 2017 class with National Signing Day just completed, most coaches and programs have already started working on the 2018 class. That's the way the recruiting cycle works, because getting an early jump will help the schools land a top 2018 class. In fact, it's pretty much a mandatory plan at this point.

With that in mind, we've put together the top 15 recruits for the 2018 class, according to 247Sports. Some of these players have already committed, although they could very well chance their minds come Signing Day. There's also a good chance that the top 15 players look much different in a year, as players will rise and fall throughout the season. With all that out of the way, here are the Top 15 college football recruits for 2018.

15) Palaie Gaoteote, LB - Ohio State Buckeyes
Gaoteote is the top-rated outside linebacker in the class of 2018, and the 6-foot-2, 220-pounder seems to be deciding between Ohio State and USC. For now, the Buckeyes seem to have a clear advantage.

14) Tyreke Johnson, S - Florida State Seminoles
Johnson is the No. 2 safety and No. 2 player from the state of Florida in this class, which is why the Seminoles have a clear advantage in his recruitment. Alabama, Georgia, Notre Dame and UCLA are also pushing hard for his services, but the athletic 6-foot-1. 180-pounder is leaning towards FSU.

13) B.J. Foster, S - Texas Longhorns
Foster is set to be Tom Herman's first big get at Texas' head coach. The top-ranked safety in the class is still considering other schools, but the Longhorns are such a big favorite that it's hard to imagine him ending up anywhere else.

12) Cade Mays, OT - Tennessee Volunteers
The 6-foot-6, 310-pounder committed to Tennessee way back in July 2015 and has held firm on that commitment ever since. Hard to believe the Knoxville, TN native will waver on that.

11) Brey Walker, OT - Oklahoma Sooners
Another tackle who has already been committed for over a year, Walker gave a verbal pledge to OU in November 2015. The 6-foot-7, 300-pounder is the No. 2 offensive tackle and top-ranked player in the state of Oklahoma.

10) Jamaree Salyer, OG - Georgia Bulldogs
The top offensive guard in the country and No. 2 player in the state of Georgia is heavily leaning towards committing with Kirby Smart's squad. Clemson and Alabama are also pushing hard for him.

9) Taron Vincent, DT - Ohio State Buckeyes
Vincent is the top defensive tackle and top player in the state of Florida, but the 6-foot-2, 285-pounder appears to be headed out of state. Urban Meyer has maintained a strong foothold in Florida, and that will have Vincent going to Ohio State.

8) Jackson Carman, OT - Ohio State Buckeyes
Carman will be a much easier get for the Buckeyes, as he is the top-ranked player in the state of Ohio. Meyer will do everything he can to make sure he doesn't get out of state.

7) Matt Corral, QB - USC Trojans
Corral has been committed to USC for nearly a year, and seems poised to take over for Sam Darnold whenever he eventually moves on to the NFL.

6) Patrick Surtain Jr., CB - Miami Hurricanes
LSU seems to be the current leader for Surtain, but Alabama, Clemson and all of the Florida schools are in the mix. He unofficially visited Miami three times this season, and is clearly keeping a close eye on Mark Richt's squad. If Miami has a good year next year, it will be where he likely ends up.

5) Micah Parsons, DE - Penn State Nittany Lions
Parsons has also been committed to Penn State for nearly a year, and considering he's the top recruit in the state of Pennsylvania, it's hard to imagine him going anywhere else - although Ohio State is trying to flip him.

4) Zamir White, RB - Georgia Bulldogs
The Laurinburg, NC native has as wide open of a recruitment as anyone on this list. He is considering North Carolina, Clemson, South Carolina, Georgia and Ohio State. Georgia is pitching him on immediate playing time taking over for Nick Chubb and Sony Michel when they leave after this year, which will eventually win him over.

2) Xavier Thomas, DE - South Carolina Gamecocks
The Florence, SC native is pretty much only considering Clemson and South Carolina, and I think the Gamecocks will land him. Will Muschamp knows how to develop defensive players and get them to the NFL, and is also a very good recruiter. In the end, Thomas will end up at South Carolina.

1) Trevor Lawrence, QB - Clemson Tigers
The good news for Clemson is that they already have the top player in the class committed. He gave his verbal pledge in December and is set on being Clemson's quarterback of the future.