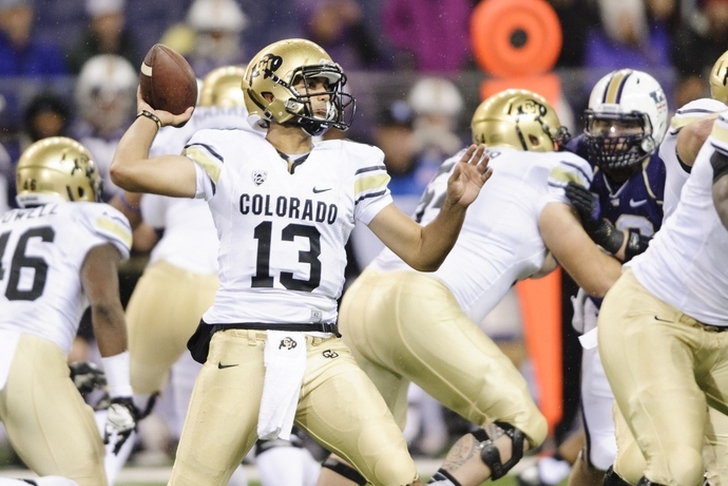 The Colorado Buffaloes are looking to put a 2-10 (0-9 Pac-12) disaster firmly in the rear view mirror on Thursday night on the islands against a Hawaii Rainbow Warriors team (4-9, 3-5 MW) that has a lot of questions of their own to answer going forward.

The Buffs actually improved overall from a metrics standpoint last year despite regressing from three wins in 2013 to just two. Colorado lost a handful of conference games by five points or less last year, including taking Cal and UCLA to the limit. The key here is QB Sefo Liufau who is turnover-prone, but still has nearly 5,000 yards passing and 40 touchdowns in 18 career stars. Colorado will go as far as Liufau's arm will take them. However, don't be surprised if they taper off considerably in a Pac-12 South division which contains FIVE teams with a legit chance of brining home a Pac-12 title.

Hawaii is a mess right now. This is the most-talented team that head coach Norm Chow has fielded in four years with the program, but there's still a considerable lack of depth at several key positions heading into the season. The offense has been completely made over, with the returns of wide receivers Vasquez Haynes and Devan Stubblefield from injuries that cost them the entire 2014 season standing as major bright spots for an offense in search of an identity. On the other side of the ball, Hawaii is very solid in the secondary but has lost a ton of pass-rushing talent in their front seven. Expect the secondary to be busy all season long, especially with a brutal opening slate that includes Colorado, Ohio State, Wisconsin and Boise State in the first five weeks.

Colorado's passing game is the major key here. If Liufau can get into a rhythm and neutralize one of the Rainbow Warriors' biggest strengths by shredding their pass defense, it'll be a very long night for the home team. If Hawaii can get enough pressure on Liufau to force him into his old turnover tricks, Hawaii can pull off the upset.

Hawaii lacks oomph on offense and has too many questions on defense to stop Liufau for long. Colorado will win this one going away, despite the fact that the end of the game will come way after their normal bed times.