College Hoops Power Rankings: Will The Best Team In The Country Please Stand Up? 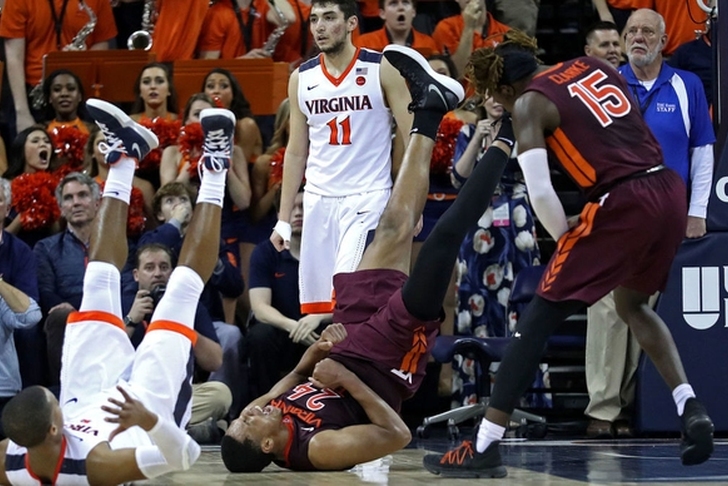 College basketball's upset epidemic hit the three teams were thought were untouchable at the start of the month.

Villanova, the No. 1 team in the country, was the latest victim of St. John's - who, fresh off their upset of Duke, have now won three games in a row after starting 0-11 in Big East.

Purdue was beaten twice in the final seconds this week, falling at home to Ohio State on a Keita Bates-Diop putback and to Michigan State on a Miles Bridges three.

That had Virginia poised to take over at No. 1 if they could beat in-state rival Virginia Tech at home...yet they fell short in overtime.

Once again, we are reminded that no team is immune in this sport.

Of course, those were far from the only notable upsets of the weekend. Kansas was smacked by Baylor, the last place team in the Big 12, in Waco, while Oklahoma and West Virginia also lost to unranked conference foes. Tennessee went on the road and lost by 28 (!!!!) to Alabama and Gonzaga went on the road and beat Saint Mary's after leading by double-digits the entire game.

The Sooners have lost six of their last eight games but are still on track to earn a four-seed in the NCAA Tournament. However, their terrible defense and lack of production outside of Trae Young (29.5 ppg, 9.4 apg) is a major cause for concern.

Louisville snapped out of their three-game losing streak with dominant wins over Georgia Tech and Pitt this past week, setting the stage for the biggest stretch of the season for the Cardinals. They'll face UNC this weekend before a two-game road trip to Duke and Virginia Tech - then they return home to face Virginia.

Florida gained some footing with wins over LSU and South Carolina this week, which is good enough to put them back in our rankings. Chris Chiozza (11.9 ppg, 5.9 apg, 4.3 rpg, 2.0 spg) is among the favorites for SEC Player of the Year.

Michigan's offensive slump came to a head in a disappointing 61-52 loss to Northwestern but rebounded with a hot shooting performance in Sunday's win over Wisconsin.

Wichita is back after 20-point wins over Memphis and UConn in perhaps their two best all-around games of the season. Are they officially back? We'll find out Saturday when they travel to take on Cincinnati in the first of two games between the sides this month.

Funny how much the perception of a program can change during the course of a week. The Hokies were a bubble team at the start of February but have won five of their last six games, including wins over UNC and Saturday's upset of UVA.

Look who's back! ASU has left their terrible January behind them by winning three straight games, including back-to-back home wins over UCLA and USC. They'll look to keep things going on Thursday when they host Arizona.

The Gaels had their 19-game win streak snapped on Saturday in a 13-point loss to Gonzaga that wasn't even that close. They will earn an at-large bid into the NCAA Tournament but are looking to take the season series over the Zags by winning the WCC Tournament.

Another team that had a long win streak snapped, Tennessee was blasted by 28 points on the road against Alabama on Saturday. That loss likely dropped them to a four-seed in the Early Bracket Preview yesterday.

The Zags played their best game of the season on Saturday night with their dominant performance over Saint Mary's. They're on a seven-game win streak and are one of three teams (Purdue, Michigan State) to rank in the top 20 nationally in both adjusted offensive and defensive efficiency.

I thought Clemson was done following Donte Grantham's season-ending injury, but all the Tigers have done is won their last four games. They're proving to be one of the more consistent teams in the country with a chance to add to their resume Saturday against Duke.

Speaking of the Blue Devils, another second-half collapse against UNC led to lineup changes that sparked Duke's blowout win over Georgia Tech on Sunday. Their defense is still terrible (79th in AdjD) and with Marvin Bagley III (21.2 ppg, 11.4 rpg) dealing with a mild knee injury, Duke continues to look vulnerable.

Two weeks ago, it looked like Kansas had finally figured it out. Now, the Jayhawks have lost two of their last three games, including a 16-point drubbing at the hands of Baylor on Saturday. Perimeter defense - something that plagued KU during their early season struggles - has continued to be this group's Achilles heel as they're now one game behind Texas Tech in the Big 12 rankings.

UNC has gained some major momentum this week with resume-boosting wins over Duke and NC State as they've won three games in a row. They'll play their third game in five days tonight against Notre Dame before a tough test Saturday at Louisville.

Rhode Island is the best mid-major in the country and they continue to prove it with a 15-game win streak. Their defense (26th in AdjD) and guard play are the keys in what I'm expecting to be a long tournament run.

Auburn was the top overall two seed in the Early Bracket Preview on Sunday, but a home loss to Texas A&M on Wednesday drops them down a few spots in our rankings. As we saw in that game, Auburn's lack of size can be exploited by bigger teams.

Arizona snapped a two-game losing streak with a resounding win over USC on Saturday to get back on track. Thursday's showdown against Arizona State is the biggest test they have remaining on their schedule.

The Bearcats have now won 16 games in a row, the longest active streak in the country, following a 76-51 win over SMU. This coming week (at Houston, vs. Wichita State) will be Cincinnati's toughest tests since AAC play started.

Purdue looked good against both Ohio State and Michigan State this week, yet lost to both in the closing seconds - raising questions about their ability to make a long run in the tournament. That said, Isaac Haas (15.0 ppg, 5.3 rpg) was an offensive beast in both games.

Ohio State's win over Purdue put them in first place in the Big Ten, and then Purdue's loss to Michigan State put the Buckeyes in first all by themselves. Tough road tests against Penn State and Michigan await them this week.

Guess who's all alone in first place in the Big 12? That would be Texas Tech, who has won six games in a row and are peaking at the right time. Their defense (third nationally in adjusted defensive efficiency) is as good as any in the country and Keenan Evans (18.4 ppg, 3.5 apg) is capable of carrying them on a long tournament run.

Thanks to a questionable call in the final second, Xavier kept their eight-game win streak alive with a win over Creighton. They're now 8-0 in games decided by five points or less this season, including their last three in a row. The clutch play of Trevon Bluiett (18.9 ppg, 5.6 rpg) is a big reason why.

Michigan State validated their lofty record with a three-point home win over Purdue on Saturday (shoutout Miles Bridges), but it was just their second top 50 RPI win (North Carolina) of the season. They could be the most complete team in the country but that lack of resume and consistent dominance keeps them at No. 3 for me.

Virginia and Villanova are still the top two teams in the country in my mind, but the offensive struggles and low margin for error that has plagued UVA in the past showed up again in their loss to Virginia Tech. As such, they fall to No. 2 in these rankings.

The Wildcats rebounded from the St. John's loss to beat Butler on Saturday, avenging their first loss of the season thanks to 30 points from Donte DiVincenzo and 27 points from Jalen Brunson. And, that victory means Villanova still has not lost back-to-back games since the 2012-13 season. They're the best team in the country when healthy and I give them the slight nod over Virginia.