College Hoops Power Rankings: No Team Is Safe As Regular Season Winds Down 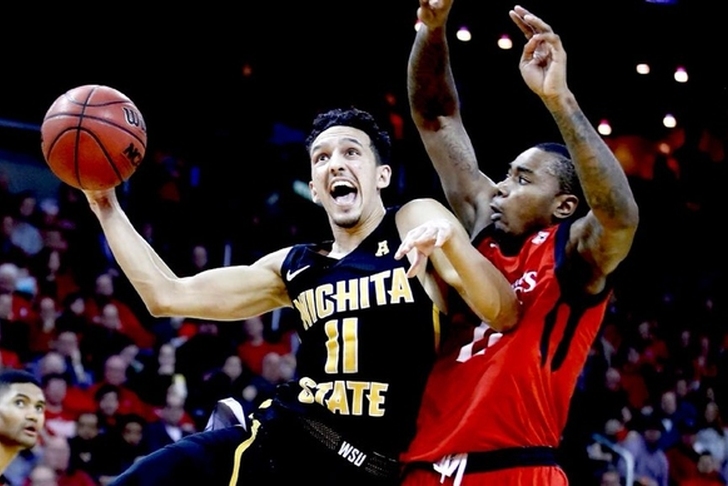 Who's ready for March?

The college basketball season is winding down with the first conference tournaments starting next week and several teams are setting themselves up for a long run through the Big Dance.

Villanova went to Xavier and handled the Musketeers in a battle of top four teams - re-affirming their spot as the best team in the Big East - while Wichita State won the game of the year in the American over Cincinnati. Both veteran teams are playing their best at the right time and have given some clarity to each respective conference race.

Speaking of conference races, the Big 12 is coming down to the wire. Kansas, going for their record 14th conference title, came from behind to beat West Virginia to move into a tie for first with Texas Tech, who lost at Baylor. Those two teams will meet in Lubbock on Saturday.

The Gaels were upset by San Francisco this week before snapping their two-game win streak with a win over Portland on Saturday. Their poor defense and lack of athleticism will continue to limit them.

UCLA is quietly 6-1 in their last seven games and should be playing their way into the NCAA Tournament. Aaron Holiday (19.4 ppg, 5.7 apg) may very well win Pac-12 Player of the Year.

The one team who beat UCLA during this stretch? Arizona State. The Sun Devils are coming off a disappointing home loss to Arizona but played well in that game and are still extremely dangerous.

NC State returns to the rankings following road wins over Syracuse and Wake Forest this week. At this point, the Wolfpack should be pretty solidly in the NCAA Tournament field.

The Vols are suddenly sliding, losing two of their last three games, including a double-digit loss to Georgia on Saturday. Offense has been a struggle for Tennessee in this stretch as they're averaging just over 60 points per game - 15 below their season average.

Virginia Tech had a major letdown game in their 22-point loss to Duke this week following their win over Virginia but bounced back by blowing out Georgia Tech. They're a tough, hard-nosed team that is playing well right now.

Clemson blew a big lead at Florida State before suffering a disappointing home loss to Duke on Sunday. Guard Shelton Mitchell suffered a concussion in the OT loss to FSU, and with Donte Grantham already out for the season with a knee injury, Clemson doesn't appear to have the depth or top-tier talent to compete with the best teams in the country.

Nevada cemented themselves as the best team in the Mountain West with a win over Boise State this week and are now 10-2 in true road games this season. Led by Caleb Martin (19.6 ppg, 5.2 rpg), this is a group no high seed wants to see in the tournament.

John Beilein's squad is peaking at the right time, winning five of their last six games including a 74-62 win over Ohio State on Sunday. They're still a perimeter-oriented team but are playing better defense (21st in adjusted defensive efficiency) than we've seen in years past and take great care of the ball (second nationally in turnover percentage).

Are we sure Cincinnati is that good? The Bearcats fought hard but lost at home to Wichita State and still have a resume where their best wins, RPI-wise, are over Houston (who they also lost to this week) and Buffalo. Despite having the country's second-best defense, Cincy has offensive questions that continue to show up whenever they play quality competition.

What a bad, bad week for Ohio State. The Buckeyes were blown out by Penn State and handled by Michigan. They have an opportunity to get right before the Big Ten Tournament with Rutgers and Indiana upcoming on their schedule, but their hopes of winning the conference's regular-season title appear to be gone.

The Zags are on a nine-game win streak and are one of three teams (Purdue, Michigan State) to rank in the top 20 nationally in both adjusted offensive and defensive efficiency.

Purdue suffered their worst loss of the season last week against Wisconsin, but the Boilermakers bounced back and snapped a three-game losing streak on Sunday against Penn State without Vincent Edwards, who was out with a sprained ankle. They have a great chance to get back in a groove this week (at Illinois, vs. Minnesota) before the Big Ten Tournament.

Rhode Island had their 16-game win streak snapped by St. Bonaventure (another NCAA Tournament team) on Friday, but star E.C. Matthews was playing at less than 100 percent after suffering a knee injury earlier in the week. Their defense (30th in AdjD) and guard play are the keys to what I'm expecting to be a long tournament run.

Auburn was a projected one-seed prior to their loss to South Carolina on Saturday, but the bigger loss was that of Anfernee McLemore (7.4 ppg, 5.3 rpg, 2.7 bpg) the SEC's leading shot blocker. He suffered a gruesome, graphic injury that resulted in him dislocating his ankle and fracturing his tibia, along with suffering ligament damage. He's done for the year.

I'm gonna go ahead and call it - the Shockers are turning it on right now. Wichita has largely underachieved this season after being ranked in the top 10 in the preseason, yet this veteran squad appears to be playing their best at the right time, starting with Sunday's win over Cincinnati. Led by Landry Shamet (14.7 ppg, 5.2 apg), the Shockers have one of the most efficient offenses in the country. If they can turn the corner defensively, look out.

The bad news for Duke is that Marvin Bagley III has missed the last three games with a mild knee sprain and no one knows for sure when he'll be back. The good news is that the Blue Devils have won all three games because Grayson Allen (15.0 ppg, 4.6 apg) has broken out of his slump. He is averaging 22.3 ppg during this stretch.

Death, taxes, and Kansas winning the Big 12 (reminder to file your taxes, by the way). The Jayhawks moved into a tie for first in the conference with a come-from-behind win over West Virginia thanks to the stellar play of Udoka Azibuike (21 points, three blocks).

Texas Tech's loss at Baylor would've been huge news if, you know, the Bears hadn't beaten Kansas on their home floor last weekend. Still, that loss snapped a seven-game win streak. The conference could very well be decided on Saturday when they host the Jayhawks.

UNC is as hot as any team in the country right now with five straight wins. The Heels still have some defensive concerns, especially on the perimeter, but their offense has been so good that it hasn't mattered. They're averaging 90 ppg during their win streak.

Arizona flexed its muscle on Thursday with a road victory over Arizona State. They don't have a case for a No. 1 seed, but projected No. 1 pick Deandre Ayton (19.7 ppg, 10.9 rpg) has the Wildcats playing like one of the best teams in the country.

Xavier just can't beat Villanova. Their loss to the Wildcats snapped a nine-game win streak, but they're so proven that they don't fall in these rankings.

I still don't entirely trust this Michigan State team. Yes, they've won 10 games in a row, but four of their last five games have been decided by five points for less - and three of those games have come against non-tournament teams (Indiana, Iowa, Northwestern). And, although they won, getting down 27 points to the Wildcats isn't a good sign.

When healthy, Villanova is the best team in the country. And, with Phil Booth expected to return this week, it looks like they'll be healthy at the right time. Booth's return should help with some Villanova's depth and some of the defensive problems we've seen from them in his absence, but we can't ignore the way they were handled by Providence.

Virginia won at Miami in their only game of the week thanks to another stout defensive effort. That defense, on pace to be the best in the KenPom era, has made them the most consistently great team in the country. That's why they're No. 1 in these rankings even though I think Villanova is the better team.