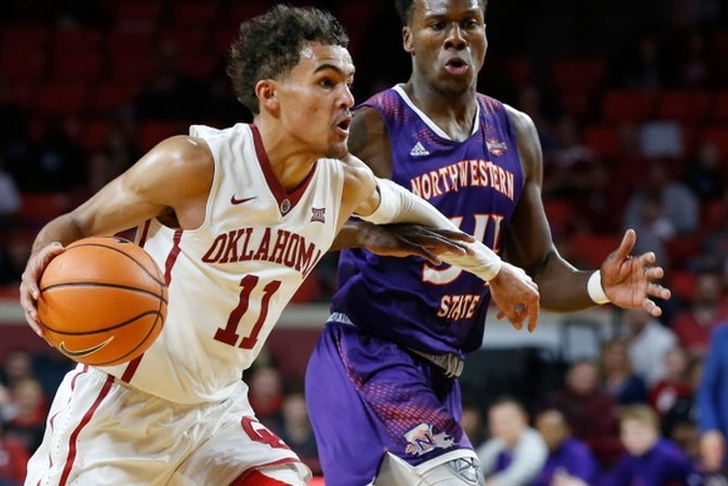 Conference play finally starts for everyone in college basketball this weekend, and while there weren't many quality games over the holidays, there are still talking points and questions surrounding some of the best teams in the sport. We're going to be posting these every Wednesday now throughout the course of the season to try and help answer those questions. Hit me up on Twitter or Facebook if you want to join the conversation! Now, let's get into it:

friendly wager with a buddy brian he thinks Asu won't be seeded 1-4 in the NCAA tourney what's your thoughts ?

I've said this for a few weeks now - Arizona State is really, really good and I love their backcourt, but they have defensive issues that make me think this top-five thing won't last.  Their defense ranks just 122nd in the country in adjusted defensive efficiency and 81st in the effective field goal percentage defense against - both of which are easily the worst among KenPom's top 25 teams.

I also have a concern that they'll eventually "die by the three," since roughly 40 percent of their total shots come from three-point range. All it takes is a tough shooting night from one or two players - a common occurrence - and they don't have anything else to rely on.

That said, considering how good they are offensively and the lack of top teams in the Pac-12, they'll easily win enough to be a top-four seed. I see them grabbing a three.

Is there anything Purdue can do to secure the top 10 ranking they deserve, other than waiting for others to lose?

Purdue is tough. They have a great resume with four road/neutral top-50 wins to go with a home victory over Louisville, but like we've seen with Arizona, those Battle 4 Atlantis losses have really stuck with them. I have them at No. 11 in my power rankings for a few reasons.

1) That loss to Western Kentucky hurts.
2) None of their wins are really elite, statement-making wins.
3) There's a clear top five to me in Villanova, Duke, Michigan State, Arizona State, and Oklahoma.
4) They're competing with undefeated or one-loss teams (whose losses are "quality losses") for those final five spots in the top 10 with the exception of Wichita State, who has been playing without Markis McDuffie.

I think now they just need to wait for others to lose.

Speaking of Louisville...how about a coin flip? Kentucky can't shoot from the outside and still can't defend on the perimeter, but Louisville also hasn't looked quite right this season - especially offensively - in the aftermath of the FBI investigation and Rick Pitino's firing. I don't think David Padgett has his feet completely under him yet as the head coach. The two teams will meet on Friday in Lexington and I wouldn't be surprised if the home crowd made the difference for the Wildcats. 75-71 Kentucky.

What are your thoughts on Auburn’s team this year and chances of making the tournament? - Ben (@bensingletary)

I'm not really sure what to make of Auburn. They're 11-1 despite being shorthanded (which is really a credit to Bruce Pearl) but haven't really played anyone yet, so while they look like a bubble team, we aren't exactly sure. If they can get to .500 in conference play, they'll be in.

Some questions for tomorrow: 1. Do you think Nevada is legit? 2.Where do you have Oregon finishing in the Pac 12? 3. Is Kentucky going to win the SEC? 4. Will Trae Young be a top 5 pick in the draft? Where do you see him being drafted? - JAKE (@Jakeroxx2 )

Four questions in one? Let's tackle them.

1) They're not legit in terms of being a top 25 team and the best mid-major outside of Gonzaga, but they're a team no one will want to play in the NCAA Tournament.
2) I have them fourth behind Arizona State, Arizona, and either USC or UCLA.
3) No. I picked Florida in the preseason but Texas A&M has been the best team in the conference.
4) He likely won't. The top five is pretty much set with Marvin Bagley III, Deandre Ayton, Luka Doncic, Michael Porter Jr., and Mohamed Bamba, but he'll go top 10, if not No. 6. I think he has passed Collin Sexton as the best point guard prospect in the draft.

Where is undefeated TCU in the Big 12 pecking order?

I have TCU second right now behind Oklahoma in my power rankings, but realistically, I see them finishing third behind the Sooners and Kansas. I don't think the Horned Frogs will be able to maintain this level of offense they're playing but they'll be good enough to earn a top-five seed in the tournament.

With non conference pretty much over, and if things play out as predicted, is the Missouri Valley a 1 bid league?

The Missouri Valley is a one-bid league no matter what I think, with the exception of Northern Iowa only losing one or two games in conference play. A number of teams fell flat in non-conference play, and while Loyola-Chicago got that big win over Florida, they have a 17-point loss to Milwaukee and a 34-point loss to Boise State to counteract that.

Is Gonzaga a mid major ?

Yes and no. Playing in the West Coast Conference obviously makes them a mid-major, but they've been playing at a high-major level for the better part of two decades, and we've seen the selection committee treat them as such. I think the best way to describe them is a high-major quality program at the mid-major level. That high-major quality will give them a deserved pass for a lack of quality wins that comes from playing in the WCC, but it also gives them the opportunity to suffer more back-breaking losses that can really hurt their resume.

What happens when a coach makes a home visit in recruiting. I know some take 2-3 hours. What all happens and talked about?

What is your take on the Grad Transfer trend? Thank you.

I honestly don't mind it. Detractors will talk about how it has killed mid-majors and is the reason why there aren't as many upsets/Cinderella runs anymore, but grad transfers aren't the reason for that. Notable runs like VCU and George Mason were backed by real quality coaches in Shaka Smart and Jim Larranaga, while others like Davidson and Butler were spearheaded by future NBA stars in Stephen Curry and Gordon Hayward, respectively (Butler also had Brad Stevens). For the most part, you can point to upsets being caused by a team led by an NBA player (Kyle O'Quinn and Norfolk State, C.J. McCollum and Lehigh, R.J. Hunter and Georgia State, etc.)

There simply hasn't been much NBA talent at the mid-major level right now, and 99.99 percent of those grad transfers aren't draft picks. It's good for the players and has been used as an easy target for the lack of mid-major success - but it isn't warranted.

Are the #pacers hurting themselves by being slightly better than average or is the middle@of the draft more wide open this year?

The worst place to be in the NBA is in the middle. Indiana has found some good pieces for the future but this class is really thin outside the top 12 or so. If the Pacers can sneak into that range, they'll be fine. If not...they're hurting themselves long-term.

How do the magic become relevant again.... asking for a friend - @colincb4

Orlando has been lacking that star go-to guy since Dwight left for the Lakers, and like a lot of teams, not having that guy has really limited them. However, the Magic almost need to tear down their entire roster and start over. That starts with getting a top-four pick in the draft and getting one of those star guys.