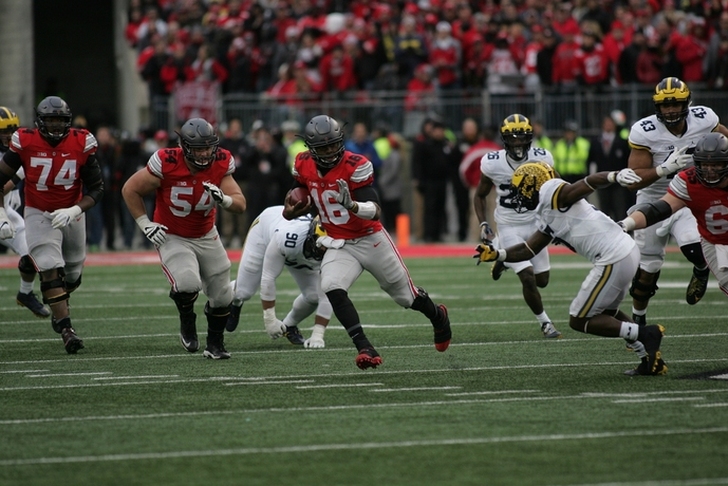 The College Football Playoff committee has made it quite clear that the quality of team's schedules matter a great deal. Because teams typically schedule games so far in advance, it can be a bit tricky to matchup against other top teams out of schedule. However, several teams have managed to make it work, both in conference and out of conference for 2017. But which schools have the toughest schedules this year?

Below are the 10 teams with the most difficult schedules. Both in-conference and out-of-conference games were considered, with road games giving a team a boost in the rankings. Several teams, such as the Clemson Tigers and USC Trojans, just missed out on the list.

A game against Maryland might be tricky, but the really tough game comes on the road against USC. We'll know early in the year if Texas is ready to contend as quickly as some think. Games against the two Oklahoma schools are at home/neutral site, but are back-to-back and won't be easy. Road trips late in the year against TCU and WVU will be tough. It's not a stacked schedule, but Texas doesn't have an easy route.

It's not a schedule stacked with Top 10 teams, but only one team the Irish played last year failed to make a bowl game. And that's Michigan State, who missed a bowl game for the first time in the Mark Dantonio Era. That's a consistently good program and they should have a bounce back year, if Sparty fails to return to the College Football Playoff. A Notre Dame vs. Georgia early season matchup is exciting and Georgia could be really good this year. The game against Miami looks like one of Notre Dame's toughest road games all year. Games against USC and Stanford will likely have College Football Playoff implications, although maybe not for the Irish.

The caliber of opponents is impressive, but Florida's rank is lessened because they play all of three true road games this year. Michigan is a tough neutral site game, which will feature a Florida offense with question marks against a rebuilt Michigan defense. Florida lucks out by drawing Tennessee, LSU, Texas A&M, UGA and FSU at home, but those will not be easy game.

Even though a home game against Oklahoma helps them get into the Top 10, this OSU schedule is manageable. A road game against Nebraska is the toughest road game until the season finale against Michigan. OSU gets Penn State at home. There are three very tough games on the schedule, but it's not as hard as it could have been.

Oklahoma will look to avenge last year's loss with a road visit to another strong Ohio State team. The Big 12 schedule isn't exactly easy, but getting WVU at home helps. Back-to-back games against Texas and KSU could result in an upset loss. A road trip to Oklahoma State could be a CFP elimination game.

Auburn has several tough road games early in the year. They visit Clemson, a tricky matchup even without Deshaun Watson. Then it's on the road to LSU and Texas A&M, critical games for the SEC West race. Georgia might be the best SEC East team this year, making for a tough home game. Alabama will likely be the best team Auburn plays this year and that's always a difficult game to win.

Michigan opens the year against Florida, which will be tough. Yes, Florida's offense has issues, but Michigan's defense lost a ton of talent. Then it's a rough slate of conference matchups for Michigan, with road trips to PSU and Wisconsin. The Wolverines have a difficult end of season, heading to Wisconsin and then hosting OSU. Those two games will play a major role in determining the Big Ten title game.

The FSU vs. Alabama game is the best one on college football's opening weekend and it should be a great one. Four SEC games stick out as real challenges for the Crimson Tide. A road trip against Texas A&M could be tough, although the Aggies do fold around October once SEC play starts. The Vols are the best SEC East team Alabama plays this year, but they might not be as good this year. A new-look LSU squad comes to Tuscaloosa, while a road game against Auburn is never easy. That game against the Tigers could be a CFP elimination game, if QB Jarrett Stidham turns out to be the real deal.

FSU starts the season with the marquee matchup of the first week, a neutral site game against Alabama. It's a game that could very well end up a CFP elimination game. While FSU does draw both Miami and Louisville at home, those won't be easy contests. Road games against Clemson and Florida late in the year will be tough as well.

Maryland went just 6-7 last year, losing in their bowl game. The 2017 schedule does them no favors. They travel to open the year against a new look Texas team, but the conference schedule is the most difficult of any Big Ten team. They get the "big four" of OSU, Michigan, Wisconsin and Penn State, with only the Nittany Lions at home. Even a road game against a MSU team looking to rebound won't be easy. A very tough schedule might prevent Maryland from making it to a bowl game.

Follow our NCAA page for all the latest College Football News or download the Chat Sports App!