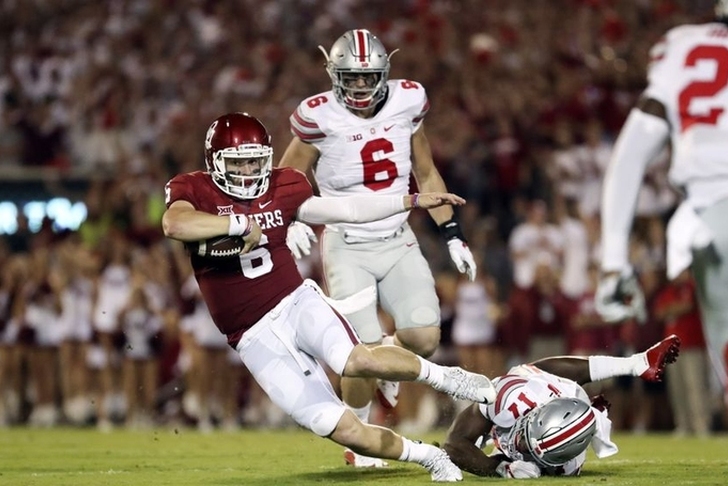 The first full weekend of the college football season came with plenty of excitement, but now Week 2 is on deck with a handful of marquee games that are sure to shape the College Football Playoff race. And, with just one ranked team falling to an unranked opponent last weekend, there could be plenty of craziness on Saturday. In this Week 2 preview, we update the Heisman race, top storylines and preview all of the biggest games this weekend:

Top Storylines
When will the major upsets come?
Last week, we saw only one game in which a ranked team lost to an unranked team when Texas lost 51-41 to Maryland. Three other teams barely escaped the same fate, yet it was still one of the more tame college football weekends we've had in recent memory. There's the potential for several such upsets this weekend, and if there's one thing we know about college football, it's that these upsets will happen at some point. Will this weekend be that weekend?

College Football Playoff race already thinning out
Another thing worth keeping an eye on Saturday are the four matchups between ranked teams, including three games between teams ranked in the top 14. They will do more than provide us with entertaining games - they will help determine which of these teams are legitimate title contenders and which teams are not, thinning out the playoff race. We will break down each of the games below, but this is shaping up to be one of the more important weekends of the entire season.

Best Games
#2 Ohio State vs. #5 Oklahoma
This is easily the game of the week. The second half of a home-and-home series between these two, Ohio State cruised to an easy 45-24 win over Oklahoma in Norman. Star quarterback Baker Mayfield and the Sooners have spent all week talking about getting revenge for that loss, but that is much easier said than done.

Ohio State has perhaps the best defensive line in the entire country, and the biggest determining factor in this game will be if they can affect both Mayfield and Oklahoma's passing game with a consistent pass rush. If they can slow OU's offense down - which I think they will - the Buckeyes will win this game.

#3 Clemson vs. #13 Auburn
There were plenty of questions surrounding this Clemson team going into the season as they had to replace several key players, especially legendary quarterback Deshaun Watson, but they looked great in their season-opening 56-3 win over Kent State. New QB Kelly Bryant led the show with his running ability and looked excellent throwing the ball, while their defense was as dominant as advertised.

Of course, Auburn presents a much more legitimate test than the Golden Flashes. They also possess a great defense and their offense looked much better with quarterback Jarrett Stidham, the Baylor transfer, under center. I expect this game to be close throughout because of how even the teams are talent-wise. If the game was at Auburn, maybe they would win. But it's at Clemson, so they get the nod.

#6 USC vs. #14 Stanford
The Trojans were one of the biggest disappointments of college football's opening weekend, trailing Western Michigan for almost the entire game before pulling away late in the fourth quarter. Now comes a test against a Stanford team that has looked as good as any, dominating Rice for a 62-7 win in Australia in late August.

Heisman favorite Sam Darnold was largely to blame for USC's struggles in that opener, throwing two interceptions with no touchdowns as the offense was out of rhythm all game. If USC plays the way they did against Western Michigan, they will lose. Luckily for them, I think Darnold gets things turned around and leads them to a hard-fought victory.

#15 Georgia vs. #24 Notre Dame
While the first three games in this section will thin out the playoff race, this game will put one team in contention while virtually eliminating the loser. Georgia was the heavy favorite to win this game before the season, but are now starting true freshman backup quarterback Jake Fromm after Jacob Eason suffered a knee injury in their opener against Appalachian State.

He will undoubtedly struggle in his first start on the road after looking shaky against the Mountaineers, and Notre Dame is coming off an impressive 49-16 win over Temple in which both their offense and defense looked excellent. And, since this game is in South Bend, I think the Irish make a statement.

The biggest game that will impact their Heisman race is Oklahoma's matchup against Ohio State. Mayfield gained the most ground with his performance last Saturday, but Buckeyes quarterback J.T. Barrett can also enter the forefront of the conversation with a good game against the Sooners. Last year, Mayfield's Heisman campaign never got going because of Oklahoma's loss to Ohio State. This matchup could very well eliminate one of them from the race again.