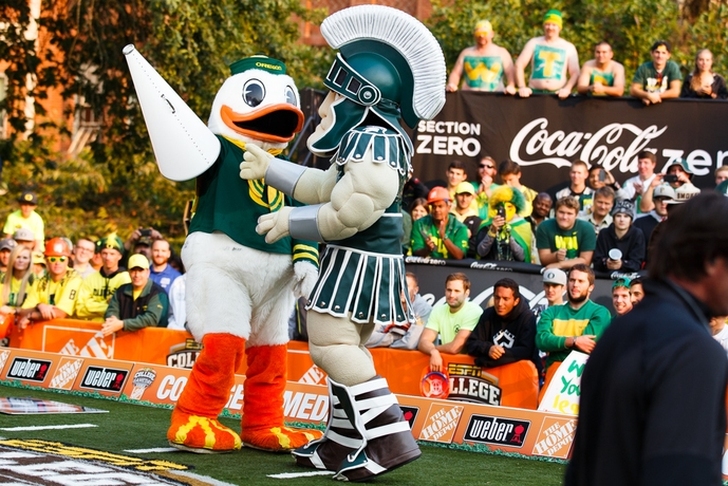 The second week of the college football season was chock full of intrigue and upset alerts -- keeping fans glued to their recliners all day long to survey the chaos across the nation. We're not exactly sure how to process everything we just saw, but we're going to try. Here's four things we learned from this week's NCAA slate.

4. We're Not Sure What To Think About Notre Dame

DeShone Kizer's miracle 40-yard teardrop TD connection with Will Fuller stunned Virginia in Charlottesville and sends the Irish to a charmed 2-0 start. However, starting QB Malik Zaire is out for the year after suffering a broken ankle in Notre Dame's 34-27 win -- laying Irish head coach Brian Kelly's best-laid plans to waste and putting the onus on Kizer to seamlessly take the role of "next man up." He'll be thrown right into the fire next week against Georgia Tech. We have no clue what to expect from here. Johnson rode into 2015 on one of the biggest waves of hype we've seen for any unproven quarterback in quite some time. His performance in today's 27-20 Tigers escape job against Jacksonville State will muffle the Heisman chatter for now . The hulking 6-5 junior went 21-for-32 for 236 yards, two TDs and two picks, along with being held to just seven yards on four carries. Johnson drew comparisons to Cam Newton all offseason long, but he showed none of Superman's explosiveness around the edge today as Jacksonville State boxed him in and forced him to operate in the pocket. While there, he was okay but not great until shooting off some late game-saving fireworks, throwing two bad interceptions to effectively keep an inferior JSU squad in the game for the duration of the afternoon.

Let's slow our roll on Johnson. He may get into a groove, but he's very rough around the edges right now.

2. Michigan State And Oregon Are Both CFP Caliber

#5 Michigan State came out with a topsy-turvy 31-28 escape job over #7 Oregon in East Lansing, but it's very possible that both teams will be able to point back to this game in December as proof positive that they belong in the College Football Playoff. Connor Cook and the Spartans' revenge win over an Oregon program that ran them out of Eugene last year thrusts them into an enviable position where they'll likely be able to lose one game and still make the CFP field. Oregon, on the other hand, is still talented enough to run the Pac-12 table. If they do, they can point back to a 3-point loss in a hostile environment with a quarterback making his 2nd FBS start as the closest thing possible to a case-building loss.

It was a fantastic game and we'd LOVE to see a rematch if the college football gods will be so kind. Tennessee lost to Oklahoma in double overtime at home on Saturday -- a game that likely will serve as a College Football Playoff elimination game barring an undefeated miracle through SEC play. The aforementioned Oregon Ducks aren't in the same pickle as the Vols per se, but the sheer fact that they scheduled a home-and-home with Michigan State awhile back is the reason they're behind the eight ball while other elite programs muck around with non-Power Five bottom feeders and FCS opponents. It's a double-edged sword. Win these non-conference games and you have resume boosters to utilize come November and December. Lose them and you're forced to switch to desperation mode before the calendar hits October.