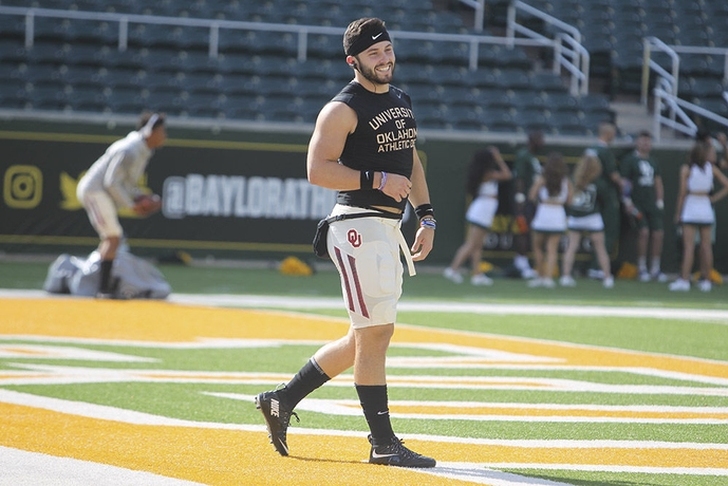 NFL team hires private investigator to follow Baker Mayfield
Former Oklahoma quarterback Baker Mayfield is projected to be a top 10 pick in the upcoming draft, and one team is going out of their way to do their due diligence on him.

According to Robert Klemko of The MMQB, one NFL team has hired a private investigator to follow Mayfield around Norman.

Later on Tuesday, Mayfield received an alert from a trusted source that he had a tail in Norman. A private investigator, he was told, was tracking his movements on behalf of a team. The MMQB was unable to verify the identity of that team, but it should come as no surprise that any NFL franchise considering a (minimum) four-year commitment and tens of millions of dollars to a 22-year-old might like to know how he spends nights near his old stomping grounds.

Some teams have character concerns about Mayfield due to his perceived cocky play style and Feb. 27 arrest for disorderly conduct.

The 2017 Heisman passed for 4.627 yards with 43 touchdowns and six interceptions while rushing for 311 yards and five more touchdowns.

Michigan fires staffer after DUI arrest
The Michigan Wolverines announced that they have fired football staffer Fergus Connolly following a DUI arrest that involved him grabbing a security guard by the throat and biting a lab tech.

The full details of Connolly's arrest, including him telling a police officer he would "put him in a wheelchair," can be found here.

The 40-year-old had been with Michigan since 2016, spending the past two seasons as Michigan's director of performance along with being the school's director of football of operations in 2017.

Prior to joining the Wolverines, Connolly was the director of elite performance for the San Francisco 49ers from 2014-16, the first season of which was spent under Jim Harbaugh.

Baylor suspends two players following sexual assault allegations
Three Baylor football players have been suspended from the program after being accused of sexually assaulting a female student on the school's equestrian team, according to ESPN's Outside the Lines.

"I feel like the university put those processes in place, and it's our job to carry them out. And, from what I've seen, the university has carried them out and everything has been done in a way that it should be done."

The McLennan County District Attorney's Office is handling the case.