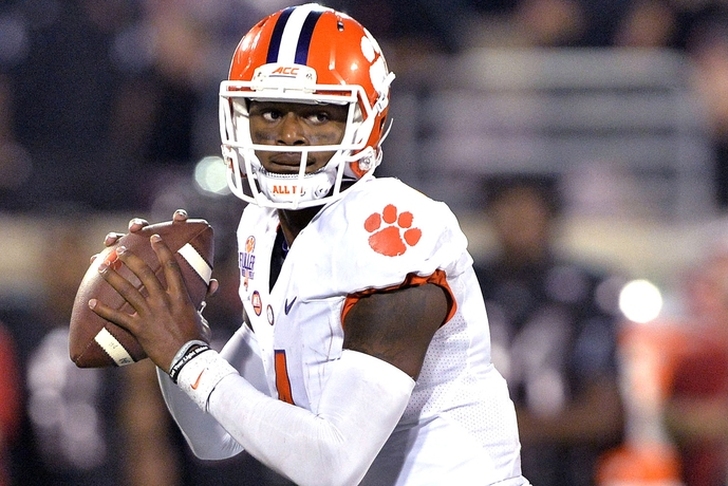 We're in the month of October now, which means it's time to separate the true college football contenders from those who will be playing in bowls named after tire companies this winter. Taking that into account, there's plenty of news & rumors to sort through heading into the most pivotal week of the season so far. Here's our College Football Rumors: Latest Week 5 News On Injuries, Recruiting & More.

Despite fear that the Clemson Tigers' scheduled game against the Notre Dame Fighting Irish on Saturday night would be rescheduled due to the approach of Hurricane Joaquin, the school announced on Friday that the game will still be played at its slated 8:22pm EST kickoff time (as part of ABC's Saturday Night Football).

TCU Horned Frogs senior defensive end Mike Tuaua and freshman wide receiver Andre Petties-Wilson have been reinstated following university-initiated suspensions and will be eligible to play against Texas on Saturday. Both players were arrested last week on robbery/bodily injury charges stemming from claims by another TCU student the duo stole a case of beer while attacking both him and his friends. The incident occured on September 4th. Both players have been suspended for three games.

Calls for Miami Hurricanes head coach Al Golden's firing have intensified after the team's 34-23 road loss to the Cincinnati Bearcats on Thursday. The team is 3-1, but many experts around the country believe that the relationship between Golden, the fan base and the university's administration is unfixable and that he's a lame duck regardless of how Miami finishes this year.

Five-star 2016 Tampa Catholic wide receiver Nate Craig-Myers has been trending towards the Florida Gators in recent weeks. The Gators' chance may get even better after this weekend with the coveted wideout scheduled to visit campus yet again, with his brother and current UF cornerback commit Jayvaughn Myers expected to join him. Craig-Myers currently holds 47 offers. Florida State and Auburn are considered to be the Gators' two main challengers for his signature.

If you haven't been paying attention, more than 10 starting quarterbacks have already been injured this season, including the likes of Notre Dame's Malik Zaire and the BYU Cougars' Taysom Hill. Several more programs have turned to backup quarterbacks without the cause of injury, including the Boise State Broncos, South Carolina Gamecocks and Virginia Tech Hokies. More than a couple conference races will be decided thanks to QBs not originally slated to start in 2015, officially making this season the Year of the Backups.