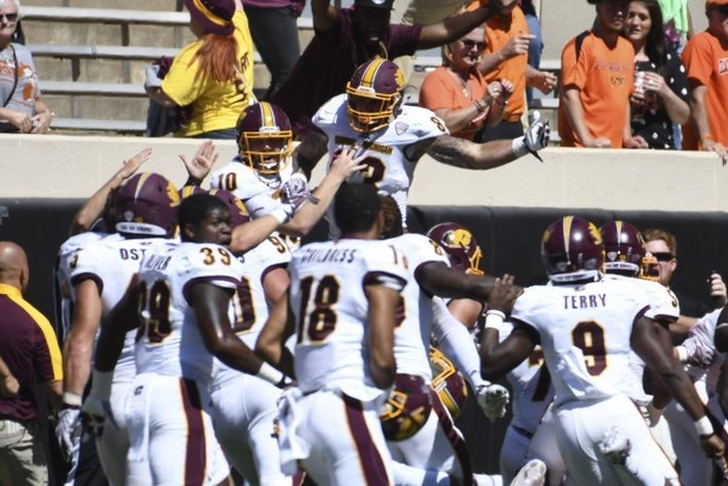 The second weekend of college football was supposed to be a bit of a downer after the incredible slate we got on opening weekend, but as these things so often go, we got a plethora of unexpected exciting and intriguing games. Here's a recap of all the biggest happenings from this past Saturday.

Wild Upset
#22 Oklahoma State appeared to have fought off an upset bid from Central Michigan in the final minute, having the ball and a 27-24 lead on fourth down with four seconds left. Rather than punting the ball and risking a return, the Cowboys opted to have the quarterback run out the clock in the backfield before throwing the ball away.

The only problem - the officials ruled it intentional grounding, and since they said the game can't end on a live-ball penalty, Central Michigan would have the ball on an untimed down to end the game. Then this happened:

A crazy Hail Mary lateral play gave the Chippewas the win. The even crazier part? Officials after the game said the game should have ended on the intentional grounding penalty, and it was a mistake to give Central Michigan the ball on the last play. Ouch.

Crazy ending
Another upset when down in Fort Worth, where Arkansas ousted #15 TCU in what will likely be one of the wildest games of the entire season. The Razorbacks led 20-7 going into the fourth quarter, but the Horned Frogs scored three straight touchdowns to take a 28-20 lead in the final minutes.

The game seemed over, but Arkansas promptly went down the field and scored a touchdown - and got the two-point conversion - with less than a minute left. Game over, right? Nope! A 64-yard return set TCU up with a game-winning field goal attempt in the final seconds - only for it to be blocked!

After both teams scored touchdowns in the first overtime period, Arkansas limited TCU to a field goal on the first possession of the second OT, meaning they could win with a touchdown. And they did:

Austin Allen trucks his way through TCU's defense to give #Arkansas the win!! #ArkvsTCU pic.twitter.com/0NHiRgAbaU

Huge road win for the Razorbacks, who only beat Louisiana Tech, 21-20, in their opener.

Close calls
As crazy as those ending were, it was almost the third biggest upset of the day. Both #2 Clemson and #9 Georgia found themselves in dog fights with Troy and Nicholls, respectively, before pulling out narrow wins late.

For Clemson, they led Troy just 13-10 at halftime, and the biggest highlight of the game was a punt return touchdown that wasn't...because Ray Ray McCloud dropped the ball before crossing the goal line.

Clemson's Ray-Ray McCloud with a 75 yards punt return TD...expect he DROPPED THE BALL before crossing the goal line! pic.twitter.com/jyp8qwwopp

Luckily, Clemson woke up and scored two touchdowns in the second half, but Troy made it close again at the end as the Tigers won 30-24.

For Georgia, the game was much less dramatic - they were just in a back-and-forth dogfight with a lesser team. True freshman Jacob Eason was inconsistent in his starting debut, and with the rest of the offense not able to pick up the slack, Nicholls held a 14-10 lead in the second quarter. UGA reeled off 16 straight points to build a comfortable lead late, but the final score ended up being 26-24. A narrow escape by the Dawgs at home.

Blowouts
Of course, there were also several teams that took care business as they were supposed to. 11 of the top 20 teams won by at least 28 points, including #1 Alabama beating Western Kentucky, 38-0. #17 Tennessee also got their season back on track, blowing out Virginia Tech, 45-24, in their game at Bristol Motor Speedway. Their 150,000+ fans set the record for largest attendance at a college football game.