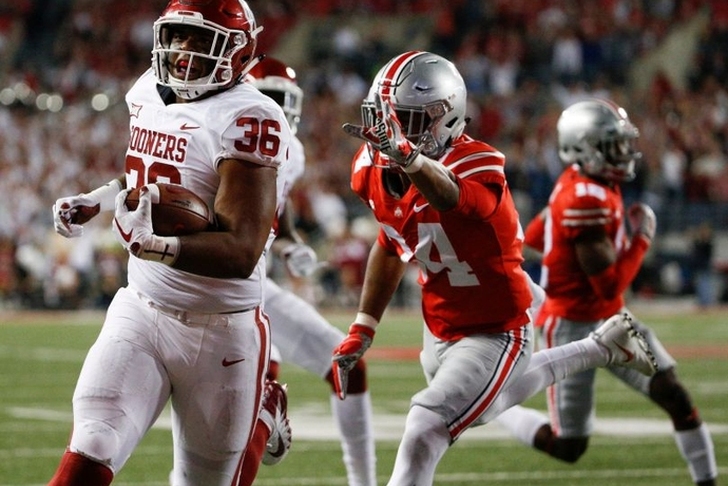 Week 2 of the college football certainly did not disappoint. There were four games between ranked teams - including three between teams ranked in the top 14 - which are giving an early shape to the College Football Playoff picture. Of course, there were several other thrilling games and fantastic performances. We're here to break it all down in this week's College Football Final:

Big games
#5 Oklahoma shocks #2 Ohio State on the road
The Oklahoma Sooners said all week that they were going to get their revenge for last year's loss to the Ohio State Buckeyes, and they got it in a big way. Baker Mayfield threw for 386 yards and three touchdowns, guiding the Sooners to 28 second-half points in an impressive 31-16 win over Ohio State.

Oklahoma answers with this 36-yard TD pass from Mayfield to Flowers! #OUvsOSU pic.twitter.com/kdqbiXtNck

Mayfield flourished on the big stage, but fellow Heisman candidate J.T. Barrett did not. The senior struggled mightily, throwing for 182 yards and an interception. He falls out of the Heisman race with his performance in this game.

#3 Clemson records 11 sacks in close win over #13 Auburn
Auburn and Clemson are both known for their high-powered offenses, but defenses ruled the day in tonight's showdown - and Clemson's emerged victorious. The Tigers limited Auburn to an astonishingly low 117 total yards in the game, which becomes even more impressive when you consider that Auburn picked up 69 of those yards on their opening drive. After that, Clemson barely allowed them to move the ball.

On the flip side, Clemson quarterback Kelly Bryant provided just enough offense, rushing for two touchdowns that proved to be the difference in the game.

Kelly Bryant powers it in to give #Clemson the lead! #AUBvsCLEM pic.twitter.com/pBX4kltg8R

Are we sure that's not Deshaun Watson? Kelly Bryant with the spectacular 27-yard TD run! pic.twitter.com/LZhJIvjur0

Bryant finished the game with 181 pass yards with 51 rush yards and those two touchdowns.

#6 USC looks sharp in win over #14 Stanford
Following USC's narrow win over Western Michigan in their opener, many were concerned about them and star quarterback Sam Darnold. The Trojans put all of those questions to rest against Stanford, racking up 623 yards of total offense in their 42-24 win.

Darnold was much more impressive with 316 yards and four touchdowns, while Ronald Jones II rushed for 116 yards and two more scores.

Ronald Jones II puts the game away for #USC with this 23-yard TD run! pic.twitter.com/86mkbko0IL

Darnold did throw two more interceptions and Stanford scored on their first three possessions, but USC's defense really clamped down in the second half. The Trojans look like they're starting to figure things out.

#15 Georgia outlasts #24 Notre Dame for road victory
This game was not that pretty as both sides struggled to move the ball consistently, but it did give us perhaps the play of the day:

True freshman quarterback Jake Fromm made his first career start Georgia in Jacob Eason's absence, and he led a nine-play drive late in the fourth quarter that resulted in a game-winning field goal and a 20-19 win for the Bulldogs.

Best performances
Louisville's Lamar Jackson reminded all of us why he won the Heisman trophy last year, totaling 525 total yards and six total touchdowns against North Carolina. He also became just the second player in college football history to throw for over 300 yards and rush for over 100 in two straight games.

Lamar Jackson (@Lj_era8) is putting on a SHOW! 43 yards to the house! pic.twitter.com/6lQGJB9xCm

You simply can NOT stop Lamar Jackson pic.twitter.com/mEPejQdu9e

You can view a full list of today's top performers here.

Heisman update
In my mind, Lamar Jackson and Baker Mayfield have separated themselves from the rest of the group of contenders with their play through the first two weeks of the season. You could realistically put either one in the top spot but right now, they're clearly at the top because of Jackson's insane numbers and Mayfield's Heisman moment.

Darnold and Saquon Barkley are both hanging around, as is Josh Rosen following a second straight great performance, but those three all have work to do.

Top plays
These are the top plays of the day that were not included in any of the recaps above:

Akrum Wadley gets into the end zone for #Iowa to force OT! pic.twitter.com/QgXeFvZQgh

Next week's biggest games
Here are the biggest games we have to look forward to next weekend, and what an amazing slate of games it is: