College Football Final: Everything You Need To Know From Week 8's Action 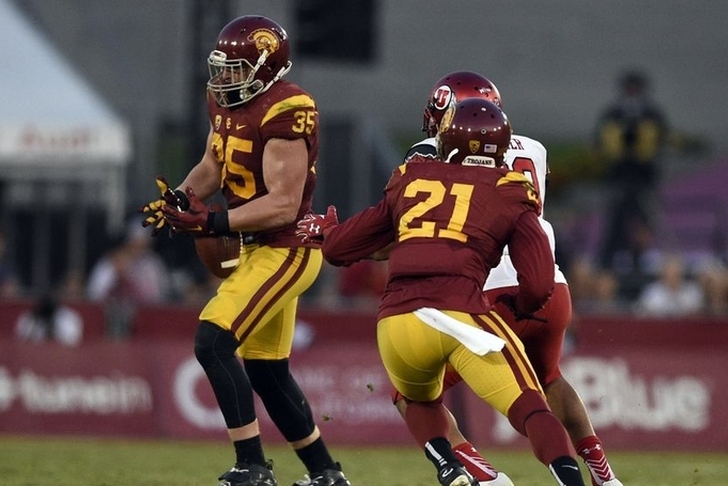 Week 8 of the 2015 college football season has wound down, and it's time to assess everything from a busy day around the nation on Saturday. Here's our College Football Final: Everything You Need To Know From Week 8's Action.

A woman suspected of drunken driving crashed a car into a crowd of spectators at Oklahoma State University's homecoming parade, killing four people and injuring 44, authorities said on Saturday. Per a Stillwater Police statement, three adults were pronounced dead on the scene. The fourth victim, a young boy, died from his injuries at OU Medical Center Children's Hospital.

It was with heavy hearts that the #14 Oklahoma State Cowboys continued on with their game against the Kansas Jayhawks in Stillwater-- a game in which the Cowboys won 58-10: "The decision was made that we're going to play, and we're going to remember the victims at the game," OSU President Burns Hargis stated in a news conference after the crash. "We're going to move forward, but we will remember what happened today."

#3 Utah Falls For The First Time Vegas knew what they were talking about. Oddsmakers installed the Trojans as three-point favorites at home against the #3 Utah Utes Saturday night, and the Trojans made the bookies some money in a 42-24 beatdown of the formerly undefeated Utes. USC seized the momentum in the first half thanks to two of Travis Wilson by freshman LB Cameron Smith, the second of which he returned 53 yards for a touchdown to give the Trojans a 28-14 lead.

Smith would add a third pick, putting one of several exclamation points for a Trojans squad still in adjustment mode following the firing of HC Steve Sarkisian. Interim man Clay Helton picked up his first win at the Coliseum as HC.

#9 Florida State Gets The Kick-Six Treatment

Last week, we had the "Michigan State Miracle." This week? Let's call it the "Buzz Heard Round The Nation."

#9 Florida State kicker Roberto Aguayo lined up for a 56-yard field goal with time expiring that would have prolonged FSU's undefeated season and extended its 28-game ACC winning streak. Not only did he miss his first-ever fourth quarter field goal in a Seminoles uniform, THIS HAPPENED:

Florida State suffers its first loss and a crushing blow to its College Football Playoff hopes. GT moves to 3-5 and picks up an ageless highlight-reel moment for its program along the way.

Al Golden On His Way Out? The Miami Hurricanes were utterly embarrassed on Saturday in a 58-0 home debacle against the #6 Clemson Tigers that could very well spell the end of the Al Golden era on South Beach. Alumni have gone from grumbling to brashly calling for his head after Miami mustered just 146 yards of offense and six total first downs in front of a sparse, boo-laden home crowd. The "Fire Golden" chants began early in this one and will likely echo until he's finally deposed. Could it happen early this week? We wouldn't be surprised.

The #1 Ohio State Buckeyes haven't made it easy on themselves this year, allowing inferior teams to hang around while causing many a nervous moment for their Columbus faithful. They broke that trend on Saturday. JT Barrett absolutely sparkled in his first start as OSU's unquestioned #1 quarterback, Ezekiel Elliott did his normal damage between the tackles and the defending national champs crushed the Rutgers Scarlet Knights in a 49-7 Big Ten romp in New Jersey.

Barrett threw for 223 yards and three touchdowns and rushed for 101 yards and two scores, pairing with a predictably brilliant Zeke performance (19 carries, 142 yards, 2 touchdowns) to rip the Scarlet Knights apart from whistle to whistle. Why exactly did Urban Meyer have Barrett on the bench for so long?????

It was business as usual for the #2 Baylor Bears against the Iowa State Cyclones in one respect, as the Bears rolled over Iowa State thanks to another offensive fireworks display, 45-28. However, the win could prove costly after QB Seth Russell sustained what was originally termed a strain in his neck that was revealed later to be a broken bone. Russell has passed for 2,104 yards and 29 touchdowns this season against just six interceptions. If the Heisman hopeful misses any time, freshman QB Jarrett Stidham will act as his replacement. Baylor has a bye next week.

Curse Of The Tide

The Alabama Crimson Tide have had the Tennessee Volunteers' number for nearly a decade. The Vols' last win against the Tide came back on October 21st, 2006. They are 0-9 against Bama since then, including a heartbreaking 19-14 loss in Tuscaloosa on Saturday. Tennessee surged ahead, 14-13, with just under six minutes left thanks to a Jalen Hurd 12-yard TD run, but watched it all slip away three minutes later. Alabama Heisman candidate Derrick Henry answered Tennessee's punch with a knockout uppercut, scooting into the end zone for a 14-yard score to keep the #8 team in the nation in the College Football Playoff hunt. Stanford RB Christian McCaffrey's Heisman stock has skyrocketed over the past two weeks. Providing a worthy encore to his 243-yard, 4-TD performance against UCLA last week, McCaffrey gained 300 all-purpose yards in a simply explosive performance to key the Cardinal's 31-14 win over the Washington Huskies. McCaffrey rushed 23 times for 109 yards and a score, caught five balls for 112 yards and another TD, and added another 79 yards on kick returns. He entered the game with an FBS-best 253 all-purpose yards per game, and he's a big reason why the Cardinal are once again a College Football Playoff threat.