College Football Final: Everything You Need To Know From Week 13's Action 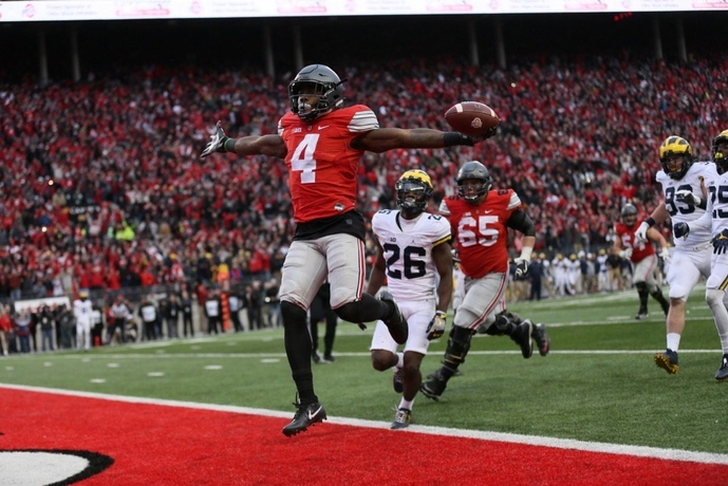 It was rivalry week in college football and it didn't disappoint. There were multiple great games, highlighted by a double OT thriller between No. 3 Michigan and No. 2 Ohio State. There was also several upsets of Top 25 teams, with Kentucky's stunning win over No. 11 Louisville the biggest one. Here is everything you need to know from the weekend - and what it means going forward:

Michigan vs. Ohio State Was A Thriller
There might not be a better game this year than Ohio State's 30-27 2OT win over Michigan. It was the first OT game in the rivalry's history, and it went down to the final play. J.T. Barrett converted a 4th and 1 when a field goal would have tied it, although Michigan fans swear he was down short. On the very next play, Curtis Samuel ran it in from 15 yards out to win the game.

And Curtis Samuel wins it for the Buckeyes! OSU wins a double-OT thriller, 30-27. #MICHvsOSU pic.twitter.com/DgcxaipHY8

This likely isn't the last time these two teams play a thrilling matchup. Both teams have bright futures.

UK Upsets Louisville
What terrible end to the season for the Cardinals. They lost 41-38 to now 7-5 rival Kentucky on Saturday. It was game that featured poor defense and ill-timed turnovers. That was a game the Cardinals should have won. Instead, they came up short and hurt Lamar Jackson's Heisman chances. I think he's still the favorite and should win (who else really deserves it?), but it's not as set-in-stone as it seemed like.

Coaching Changes
The games weren't the only thing going on Saturday. First it was LSU announcing they were promoting Ed Orgeron from interim head coach to the full-time. Then, Texas officially fired Charlie Strong and nabbed Tom Herman. That was a widely anticipated move for Texas, even if the path to it was a bit rough. The Purdue job remains open and there could be more coaches getting the boot on Sunday. But the moves by Texas and LSU take the two biggest jobs off the market. Meanwhile,

College Football Playoff Implications
Michigan is out, and any minuscule chance Louisville had went out the window when the Cardinals were upset by Kentucky. Penn State, thanks to a win over Michigan State and Ohio State's win, is heading to the Big Ten Championship game. If they win that, the committee is going to have a tough time leaving them out. Wisconsin barely  Washington's win (see below), keeps them alive for a berth. Since Alabama had no problem with Auburn, they're all but assured of a spot in the CFP. Clemson had zero trouble with South Carolina, keeping them in great position.

From Friday, Pac-12 North Goes To Washington
The Huskies didn't get the game they were supposed to get from Washington State. The Huskies took a 28-3 after the first quarter and cruised to a 45-17 win. It was never close and the Huskies helped their CFP hopes. With Michigan losing, they'll move into the Top 4 for sure. In the Pac-12 South, Colorado held on for a fun #Pac12AfterDark win to clinch a berth in the Pac-12 title game.

A Friday Full Of Upsets
The day after Thanksgiving is usually an underrated day of football. That was the case again this year, as there were several intriguing upsets. First, No. 20 Houston lost to Memphis in a thriller, perhaps a sign that the Houston team knew Tom Herman was gone. Iowa took it to No. 16 Nebraska in a blowout upset, with the Hawkeyes winning 40-10. That game clinched the Big Ten West title for Wisconsin. Then to cap it off, Air Force used a goal line stand to beat No. 19 Boise State 27-20. The Boise and Houston losses mean Western Michigan should take over as the top Group of 5 team in the CFP rankings, a spot they should have already held. Then on Saturday, Vanderbilt stunned Tennessee to become bowl-eligible. College football is fun.

Miami (OH) Makes History
We're going all the way back to Tuesday for this one. For the first time ever, a school started the year 0-6 and finished the year 6-6. Hats off to the Miami RedHawks, who used another fourth quarter comeback to gain bowl eligibility. It's marks a turning point for a program that went 0-12 in 2013. It's an incredible feat from head coach Chuck Martin, who was basically starting from scratch with a program barren of talent. If Martin continues to win at Miami, he'll be due for a bigger job.