College Football Final: Everything You Need To Know From Week 10's Action 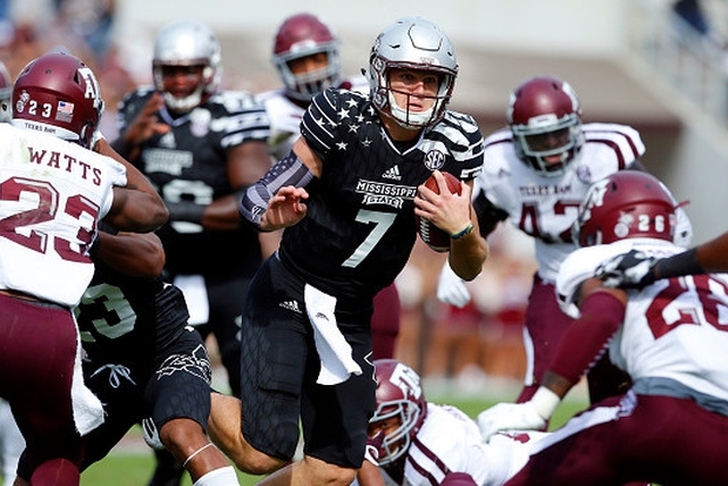 There were only two games between ranked teams on Saturday, but that only set the stage for a plethora of upsets. The SEC race became a bit more interesting as both #4 Texas A&M and #11 Florida lost on the road, which will also likely lead to a major shakeup in the College Football Playoff rankings. There were plenty of other notable happenings across the country, so here is everything you need to know from the weekend:

#1 Alabama wins slugfest over #13 LSU
It certainly wasn't pretty, but Alabama won their sixth straight game over LSU with a 10-0 victory in Death Valley. The game was scoreless for three quarters as both defenses reigned supreme, but the Tide broke out in the final frame thanks to quarterback Jalen Hurts, who reeled off this impressive 21-yard scramble:

Hurts scrambles for the 21-yard TD to give #Alabama the 7-0 lead in the 4th! #BAMAvsLSU #RollTide pic.twitter.com/DYk44fgdko

Hurts finished with just 10/19 passing for 107 yards and an interception, but rushed for 114 yards and that touchdown on 20 carries.

Alabama didn't score a non-offensive touchdown for the first time this season, but they pitched a shutout and allowed a total of 125 yards. Also of note, for the sixth year in a row, the Tide held LSU to less than three yards per carry - including just 1.2 yards per rush in this game. That's amazing, especially considering they had to stop Leonard Fournette.

#4 Texas A&M dominated by Mississippi State
The Texas A&M Aggies were the biggest surprise of the initial College Football Playoff rankings when it was revealed that they are ranked #4 in the country. Now, their hopes of making the playoff are gone. They went into Starkville and fell behind early, as the Mississippi State Bulldogs used a dominant rushing attack to pull off the stunning 35-28 win over the Aggies.

The Bulldogs accounted for 572 yards of total offense against Texas A&M - including a jaw-dropping 363 yards on the ground - as they got the victory. Quarterback Nick Fitzgerald carried the load for Mississippi State, going 18/31 passing for 209 yards, two touchdowns and two interceptions while rushing for 184 yards and two more touchdowns on 19 carries.

Fitzgerald also set the tone early, reeling off a stunning 74-yard touchdown run to give the Bulldogs an early lead:

Mississippi State's lead went to 14-0 thanks to a short TD run from running back Aeris Williams, but the Aggies looked like they were starting to gain control of the game when quarterback Trevor Knight ran 19 yards for a touchdown of his own.

However, that optimism what short lived for Texas A&M. Knight hurt his shoulder on that play and was never able to return to the game. With the Aggies' offense stagnated with backup Jake Hubenak under center, and Mississippi State took advantage. Fitzgerald threw two long touchdown passes to start off the second quarter, and just like that, the Bulldogs had a commanding 28-7 lead.

Texas A&M managed to get within 28-21 in the fourth quarter after Hubenak found Christian Kirk for a 54-yard touchdown, but the Bulldogs didn't panic. Fitzgerald led a a drive that took 7:34 off the clock, which he capped off with an outstanding four-yard touchdown run.

The Aggies added another touchdown in the final two minutes and had the ball with a chance to tie to game in the final minute, but Hubenak through an interception with 14 seconds remaining.

#11 Florida upset by Arkansas
Just hours after #4 Texas A&M fell on the road at Mississippi State, the #11 Florida Gators fell victim to the same fate against the Arkansas Razorbacks, losing 31-10.

Arkansas got solid production from both quarterback Austin Allen and running back Rawleigh Williams III, but it was their defense that stole the show. The Razorbacks limited Florida to just 241 yards of total offense, including just 12 rushing yards, as they cruised to the victory. That defense got the game started on a high note for Arkansas, as Santos Ramirez picked off Luke Del Rio on Florida's first offensive play of the game, and returned it 24 yards for a touchdown.

How about that start for @RazorbackFB!? Just an easy pick-6. https://t.co/3IgPQblCTU

Williams followed with a touchdown run on the ensuing Arkansas drive, quickly giving them a 14-0 lead. It looked like the game might be getting out of hand then, but Florida's defense stepped up. Duke Dawson intercepted Allen late in the first quarter and returned it for a touchdown, making this a ballgame.

However, Arkansas finally created more separation right before halftime, as Allen hit Drew Morgan for a seven-yard touchdown pass to give Arkansas the 21-7 lead. Both defenses took over from there, and after trading field goals in the fourth quarter, the Razorbacks iced the game on Williams' 41-yard touchdown run:

Rawleigh Williams' 41-yard TD run puts the icing on what looks like an #Arkansas upset of #11 Florida! pic.twitter.com/2wQcQcpPmM

Allen finished 15/26 passing for 243 yards, one touchdown and one interception for Arkansas, while Williams finished with 148 yards and two touchdowns on 26 carries.

Lamar Jackson Heisman Update
Jackson has been the unquestioned Heisman favorite so far this season, and he only distanced his lead as the frontrunner on Saturday. Facing a Boston College defense that is one of the best in the country, he shredded them for SEVEN touchdowns in a 52-7 win.

Jackson ended up with 231 passing yards and 185 rushing yards to go along with those seven scores.

Other upsets
Only one other ranked team fell victim to the upset bug on Saturday:

Cruise control
Here are the ranked teams that had no trouble picking up wins:

Next weekend
Here are the biggest games we have to look forward to next weekend, and what an amazing slate of games it is: